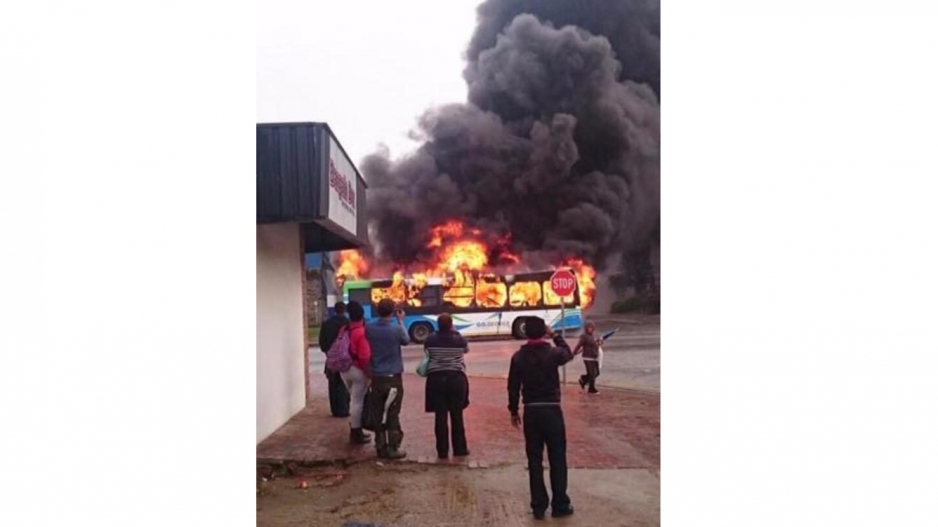 A bus burns in George as protests escalate in the area on Wednesday, 19 August.

GEORGE – Four Go George buses were torched during a protest in George in the Western Cape on Wednesday afternoon.

ER24’s spokesperson, Werner Vermaak said: “The first bus was set alight in front of the depot, and the three others were set alight near the N2 Garden Route Mall.

“There is heavy police presence at on the streets at the moment,” he added.

Police have not yet made any arrests.

Provincial police spokesperson Malcolm Pojie said: “We are currently monitoring the situation and have deployed a lot of police personal to make sure commuters are safe.”

Police were interrogating a number of people in connection with the torchings.

“We have not arrested, nor have we charged anyone, but we are talking to a number of suspects and have impounded two taxis in connection with the burning of the buses.

“We are aware of tensions between the taxi operators and the bus system, but this came as a surprise as we thought the situation had been sorted out with the local government,” he added.

The trouble started at around 4pm.

No injuries were reported.

[VIDEO] ProtestAction in George. A bus well alight in the street. No injuries reported. @ER24EMS on standby. pic.twitter.com/I1dOEdXytr