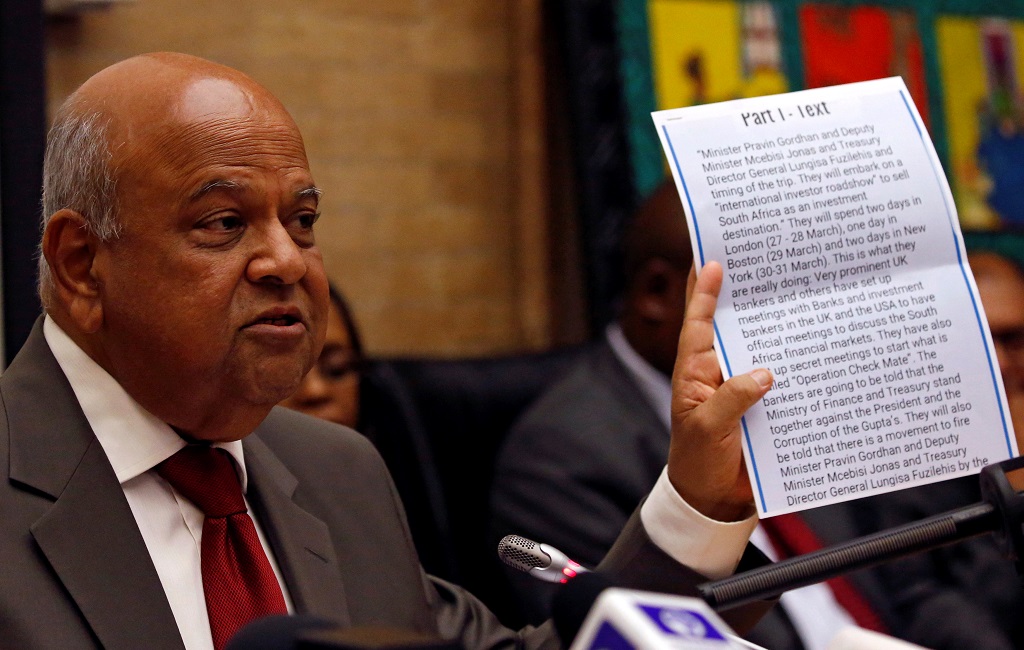 Former finance minister Pravin Gordhan holds a copy of an intelligence report that President Jacob Zuma used as justification to fire him, during a media briefing at their offices in Pretoria, South Africa, March 31,2017.

"There are many of my comrades in the [ANC] NEC that would say the same thing, that the people shall govern."

"You can’t govern if you remain in your comfortable lounge. Become organised, part of something," he told the gathering.

"You must hold us accountable, hold meetings like this frequently. That's accountability. Parliament is not the only instrument in a democratic society, it takes place everywhere in the country."

The rallying cry at the politically charged memorial service was that Zuma must go.Kathrada's widow, Barbara Hogan, says if Zuma had ears to hear and eyes to see, he would heed the call for him to resign.

In the ANC struggle tradition, funerals and memorial services of fallen comrades have always been politically charged occasions. The memorial honouring a lifelong activist and revolutionary followed that tradition.

"Mr President, if you have ears to hear and eyes to see, you'd be heeding the call for you to step down," said Kathrada's widow Barbara Hogan

The SACP's Solly Mapaila said the ANC had a choice to make - either President Zuma or the people of South Africa. Either the people or the Guptas.

Gordhan said when the ANC deputy president, secretary-general and treasurer-general all say they don't know where the new cabinet decisions are made, that was something to worry about.

Deputy President Cyril Ramaphosa has said he finds Gordhan's removal unacceptable and questioned where the decision and the list of new ministers came from, saying the top six of the ANC were not consulted beforehand.

Gordhan urged South Africans to open their eyes to what he said was economic sabotage, and to pay particular attention to how government funds were being used and who benefitted from deals in state-owned companies.