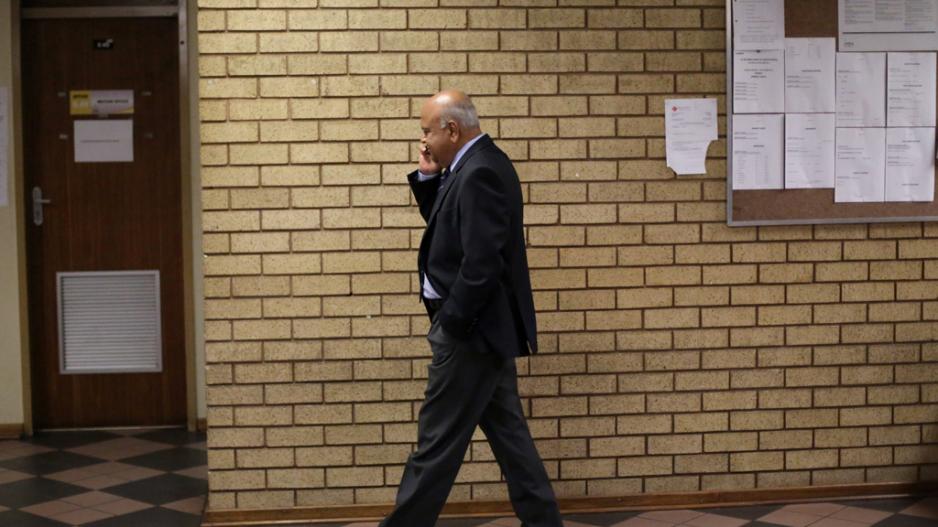 Finance Minister Pravin Gordhan speaks on his mobile outside a court room at the North Gauteng High Court in Pretoria on Tuesday, 28 March 2017.

PRETORIA - Finance Minister, Pravin Gordhan, made a brief appearance at the court deciding on Treasury's battle with the Gupta family on Tuesday.

WATCH: 'I'm here to hear how application is going' - Gordhan

There he refuted reports that he had resigned.

Gordhan wants the court to order that the finance minister cannot intervene in the family's dispute with South Africa's major banks.

Standard Bank seeks order no member of the executive can involve self in bank and client relations. Zuma failed to block this application

Gupta companies argue such an order will "condemn" Ministers who have previously involved themselves in their business.
No names mentioned https://t.co/QozhBpH0IN

He arrived at the North Gauteng High Court late into his legal battle with the Gupta family, as speculation swirled that he had resigned, or been fired.

Gordhan's battle with the Guptas has been defined by claims of state capture and suspicious transactions on one side, and on the other, accusations that the minister and the banks were colluding against President Jacob Zuma's close friends.

In the end, though, the North Gauteng High Court has ruled that these accusations and counter-accusations are not relevant to the Minister's case - and struck them out as evidence.

Striking out orders mean #GordhanGupta case not about conspiracy claims or accusations of #StateCapture. Focus solely on #PravinGordhan app.

This now means that the court won't consider a Financial Intelligence Centre certificate, identifying 72 so-called suspicious transactions involving Gupta companies when it decides whether or not to order that the minister may not get involved in the family's dispute with the banks.

The Finance Minister's legal team argued it was needed to show the scope of the problem, but the court said it can't be used.

The court will also not consider Deputy Minister Mcebisi Jonas's claims under oath, that the Guptas had offered him the job of finance minister before Nhlanhla Nene was fired.

The Court has also struck out accusations from Gupta-owned Oakbay Investments, that Gordhan had driven the banks' decisions to cut ties with the family.

Interestingly Oakbay has agreed to strike out allegations it made against PG steering a conspiracy against the Guptas. #GordhanGupta

Oakbay investment's advocate, Cedric Puckrin said his client agreed that some of their arguments were not relevant to the matter.

The minister's advocate, Jeremy Gauntlett had earlier slammed these claims as spurious and vexatious:

"Now, Oakbay is free to say what it likes about the minister discharging his obligations inside or outside the law – and discharging them well or badly. But it must be prepared to have the courage of its own convictions, and put up a factually-grounded case regarding what is called political motivations for this entirely unnecessary application."

Gauntlett: This talk of a political conspiracy and then withdrawal of comments is an abuse. #GordhanGupta

Judge President Dunstan Mlambo had suggested the parties in this case could reach a settlement - but Gauntlett said this was not possible.

Gauntlett for Gordhan: Parties tried to settle but couldn't agree on an order re: Finance Min powers. #PravinGordhan @eNCA

When court resumes on Wednesday, lawyers for the banks and Gupta companies will get their chance to argue their cases.