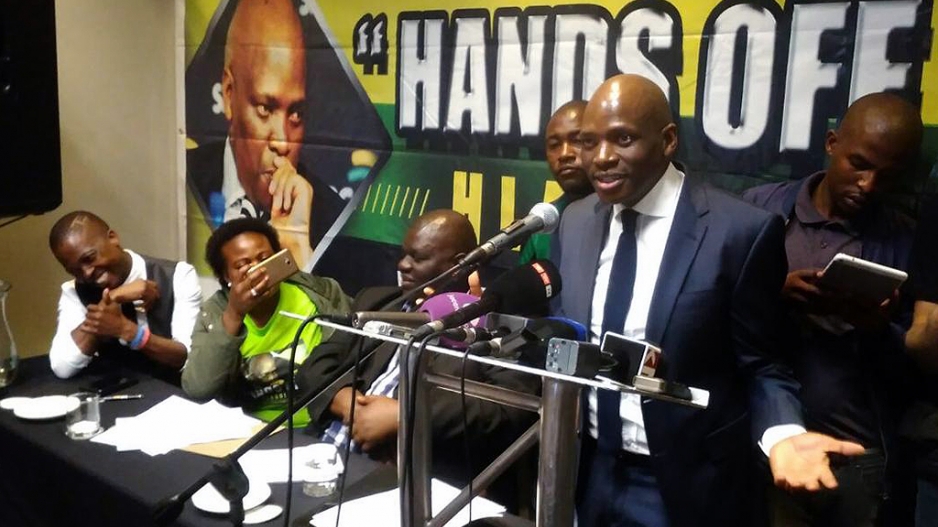 19 April 2017 - Former SABC COO Hlaudi Motsoeneng at a press briefing in Johannesburg on Thursday vowed to fight "and win" at his disciplinary hearing.

JOHANNESBURG - Hlaudi Motsoeneng says he stands by the decisions he made during his tenure as SABC chief operations officer.

Motsoeneng was addressing a news conference earlier on Wednesday.

The court ruled Motsoeneng shouldn&39;t hold any position at the public broadcaster.

Today, his supporters came out to back his decisions.

The small room was packed with people who clapped and ulululated as he spoke. They even brought CD copies of an album dedicated to him, titled “Hlaudi Dumela”.

“I am not representative SABC here…as you know, I’ve been told to stay home until my disciplinary action, at which I am gonna walk again. I walked at first one and am still gonna walk again,” he said confidently.

Motsoeneng was replaced at the public broadcaster after a damning Parliament’s ad hoc committee report that found that the previous board had mismanaged the SABC, leading to loss of hundreds of millions of rands.

The report followed a series of court actions, including the 2015 ruling that found his appointment unlawful.

The committee also recommended that former Communications Minister Faith Muthambi, under whose watch the mismanagement happened, be fired.

The SABC reportedly needs as much as R3-billion in a form of a bailout.

READ: MPs call for Muthambi to be fired, board to be dissolved

Motsoeneng lashed out at the MPs and claimed he did nothing wrong by implementing decisions such as ensuring 90-percent local content. His decision saw actors and musicians rally behind him last year.

Motsoeneng says all broadcasters should be regulated, and be forced to broadcast 90-percent local content.

“Our decisions were drivers by people’s needs. We went around the provinces, and people told us they needed local content. There was money at the SABC when I was there…”

The ad hoc committee “caused havoc” and didn’t afford him a right of reply. Their report is not implementable, he said.

He also attacked the new interim board and accused board member Krish Naidoo of being a “sell out”.

Naidoo resigned from the previous board during a committee sitting last year, and was included in the new interim board.

READ: Naidoo tells MPs of attempts to remove him from SABC

Motsoeneng praised President Jacob Zuma’s “radical economic transformation” statements, and added that SABC managers “were cowards” for not taking tough decisions and improving lives, including that of SABC service providers.

Motsoeneng has spent a lot of time in court. From review applications to appeals, there have been at least ten different hearings in the Democratic Alliance’s dispute with Motsoeneng.

READ: Hlaudi Motsoeneng has &39;no mandate&39; to speak for SABC: DA

In the last case, the Western Cape High Court ruled that the SABC&39;s new interim board should, within two weeks of its appointment, deliver a letter setting out disciplinary charges against Motsoeneng, and appoint a new chairperson to oversee proceedings.

That deadline passed last week - and attempts to get clarity from the interim board have been unsuccessful.

It has had its hands full though, dealing with the broadcaster&39;s severe financial and content woes.

Motsoeneng has vowed to fight “and win” at his disciplinary hearing, and said he was actually looking forward to it.

“I have a great team led by Zola Majova…we’re ready for that hearing…and I will walk again,” he said.

He said he did not know the date for his hearing yet.

Motsoeneng applied for leave to appeal the Western Cape High Court’s December order, but that application was dismissed.

Then in a separate case, his application for leave to appeal in the Supreme Court was also dismissed.

His future now rests with the interim board, while he remains at home on a full salary of just over R4-million a year. -- Additional reporting: eNCA