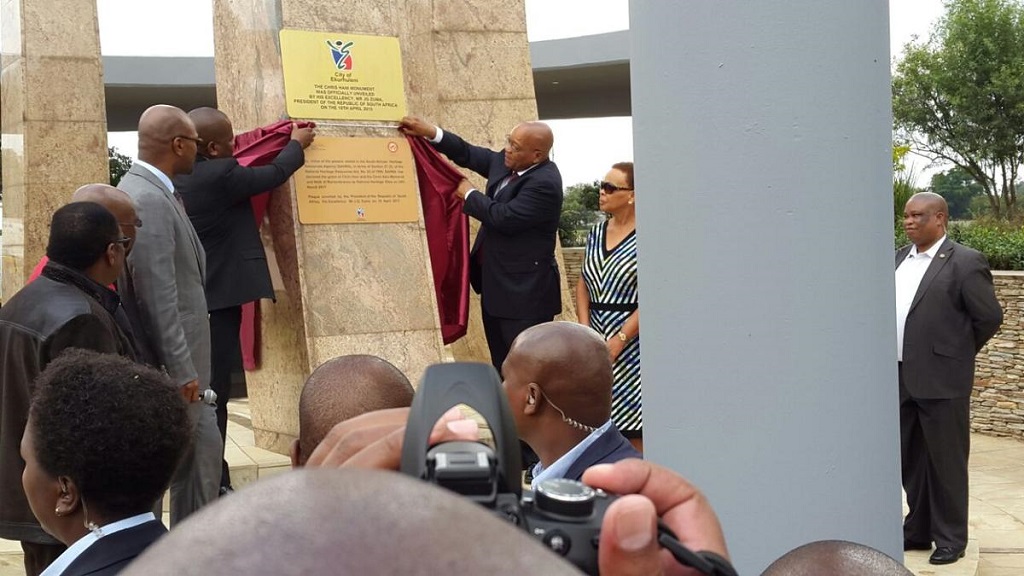 JOHANNESBURG – ANC and SACP leaders attended the 24th anniversary of Chris Hani’s death which was held at Thomas Nkobi memorial cemetery on Monday.

The widow of the slain struggle icon, Limpho Hani who was seated next to President Jacob Zuma, took to the podium and confirmed her undying support to the governing party.

That moment when President Jacob Zuma arrives at #ChrisHaniMemorial and has to greet dignitaries, including #SACP's Solly Mapaila. pic.twitter.com/O4WoEJRqQn

Hani’s widow said she was aware of rumours claiming that she is with the people who are protesting against Zuma’s presidency.

“I went to a prayer meeting to pray for our country … I’m from a prayerful family and when confronted by challenges, I pray … It’s scriptural to pray for our leaders,” she said.

“I don’t belong to a faction, I’m an ANC, there’s only one ANC,” she said to loud cheers.

Last week opposition parties and civic movements including Save SA held protest marches around the country to demand that Zuma steps down after his Cabinet reshuffle saw the sacking of finance minister Pravin Gordhan and his deputy Mcebisi Jonas.

In apparent reference to the protest marches which drew thousands, Limpho Hani said women were raped by taxi gangs, but there was no civil march to the taxi association to demand justice.

“There was no march when the Life Esidimeni tragedy occurred.”

Limpho Hani said her statement was not to scout for votes, but to highlight the disconnect in society.

She also thanked Zuma for his support when her daughter was battling drug addiction.

“I approached him when I was experiencing challenges because, he was the last ANC member who saw my husband alive,” said the widow.

Zuma had earlier led a wreath-laying ceremony in Boksburg.

Chris Hani was gunned down on 10 April 1993 outside his house in Boksburg.