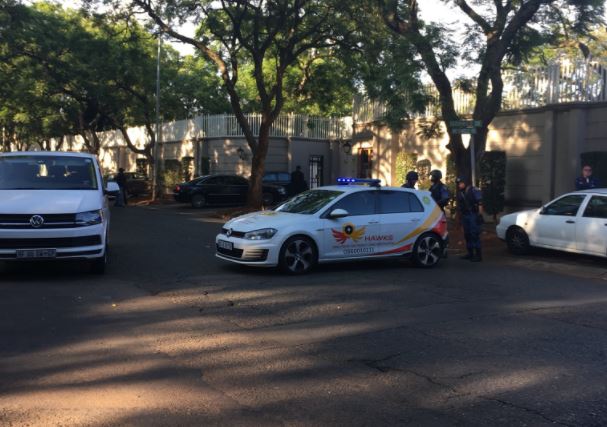 The Hawks swooped on the Gupta compound in Saxonwold.

JOHANNESBURG - The Hawks have confirmed that three people have been arrested at the Gupta family compound in Saxonwold, among them a Gupta brother and associate.

The Hawks say two other suspects are expected to hand themselves over to police.

The arrests are part of ongoing investigations into the Estina Dairy scandal in Vrede in the Free State.

BREAKING: @eNCA conforms that one Gupta brother and a business associate arrested. Other Gupta family members negotiating to hand themselves over.
Case understood to be connected to EstinaDairyProject and @MasekoThembaJ State Capture allegations re GCIS.

The suspects are expected to appear in court on Thursday.

The Hawks raided the Gupta compound in Saxonwold, Johannesburg on Wednesday morning.

The guard, who did not want to be named, said officers arrived in three vehicles around 7.30am and entered the building. They left shortly afterwards, the guard said.

The controversial family have been implicated in wide-ranging allegations of corruption.

The family&39;s also been implicated in the theft of millions of rand from the Estina Dairy Project.

The money was meant for poor black farmers, but instead, it was allegedly used for a family wedding.

Hawks swoop on the Gupta compound in Saxonwold. @eNCA pic.twitter.com/weEKmpn10S

More visuals of the raid on the Gupta compound in Saxonwold. @eNCA pic.twitter.com/zxI1DtEiFN

ZumaRecall - Reporter @AnnikaLarsen1 speaking to Fikile Mbalula as the ANCcaucus ends, asks what has been decided and also asks about the Gupta compound raid this morning. Courtesy DStv403 pic.twitter.com/dCO4jWa05o