Zuma gets rowdy reception in Parliament 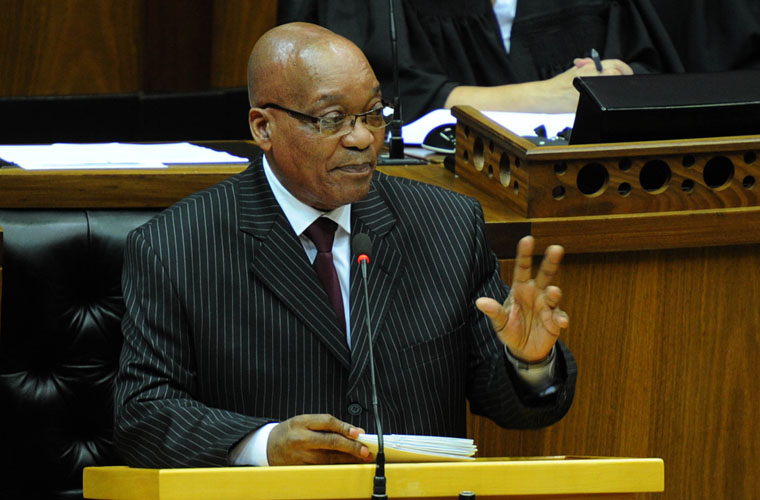 File: President Jacob Zuma told the National Assembly he has never sought to have state contracts awarded to his family.

CAPE TOWN - President Jacob Zuma's first appearance in Parliament since he survived a no-confidence move three weeks ago led to rowdy scenes on Thursday in which several opposition lawmakers were ordered out of the chamber.

The 75-year-old Zuma, whose eight years in office have been tarnished by a series of scandals, was heckled and harangued by opposition parties as he attempted to speak on a range of issues including his own alleged involvement in corruption.

Members of the Economic Freedom Fighters (EFF) party fired questions at Zuma, delaying his presentation for more than an hour.

Then when he attempted to field questions on the economy, violence against women and whether he was implicated in corruption, he faced a further barrage of interruptions. He has always denied wrongdoing.

Deputy speaker Lechesa Tsenoli ordered the EFF contingent to leave the chamber after their leader Julius Malema called Zuma "a criminal" and refused to obey instructions to stop disrupting proceedings.

"You are defending a criminal of note against honourable members who are doing their job," Malema said, pointing at Zuma.

At one point Zuma responded to Malema's interruptions by saying: "I don't take action against people like yourself."

The far-left lawmakers later walked out.

This is not the first time Zuma's speeches to parliament have sparked a sharp reaction, but Thursday's chaotic session was the first since the president survived a no-confidence motion on 8 August.

Zuma won that vote, held by secret ballot, when loyal lawmakers from his ruling African national Congress rallied to his support.

The chaotic scenes on Thursday clearly indicated the vote had not taken the heat out of the political situation.

Parliament will next week debate a proposal for early national elections tabled by the opposition Democratic Alliance (DA) which is trying to force Zuma from office before the next scheduled election in 2019. The motion seems unlikely to pass however.

DA party leader Mmusi Maimane asked the president why Zimbabwean first lady Grace Mugabe had been granted diplomatic immunity by South Africa's government after being accused of assault by a twenty-year-old model.

"With regard to Mrs Mugabe. I am not a lawyer, I don't know the point of law and I was not involved in this process. How it was done, I would be lying if I speculate," Zuma said.