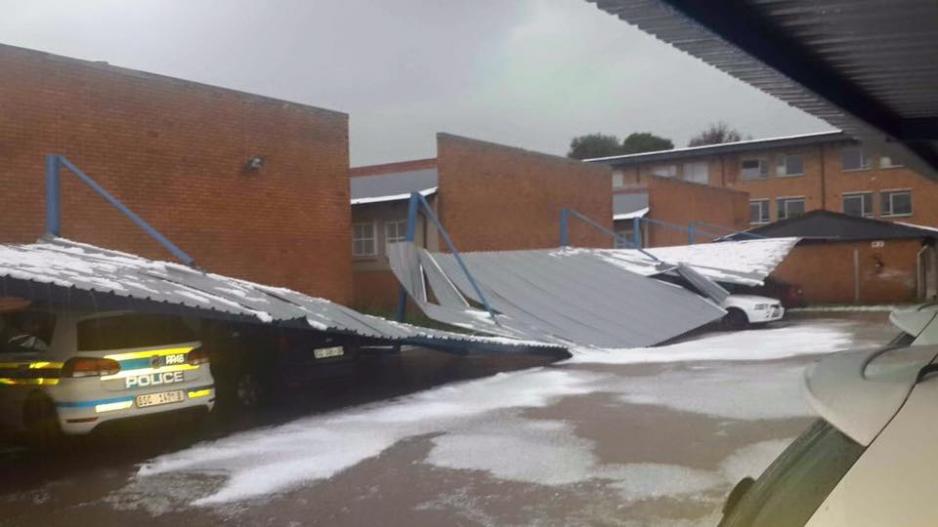 A police station in Muldersdrift after taking some heavy damage during today's hail storms.

JOHANNESBURG – Hail stones as big as golf balls battered parts of Johannesburg this evening, resulting in a deluge of images on social media of white lawns and damaged property.

Hailstones collapsed the roof of the Key West Shopping Centre in Krugersdorp.

According to Athlenda Mathe of Netcare 911 no fatalities have been reported.

"Netcare 911 paramedics managed to stabilise three people that have sustained serious injuries on scene. They&39;ve all been taken to hospital for further medical care."

Meanwhile on the roads, a vehicle was almost submerged after a flooded portion of the road got the better of the driver who was eventually rescued by passersby in the Krugersdorp area.

One of the rescuers Sipho Masondo told eNCA: “I was cautiously driving by because of the heavy rains. I had never seen rains like this ever in my life.”

"Myself and another guy noticed the car caught in the flood and we went in to see what was going on.”

"We found the driver still in the vehicle and helped him to safety. He was not hurt.”

Krugersdorp after the hail. Manu birds killed and injured. Rescuing whay I can. Extreme weather tightens its grip. pic.twitter.com/4mZt7EW2Yz