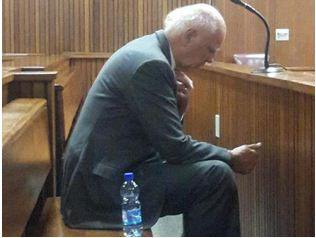 Bob Hewitt appeared in court on Friday for sentencing but this was postponed to May.

PORT ELIZABETH – Convicted rapist and former tennis star Bob Hewitt’s leave to appeal his six year jail term is expected to get underway in the Supreme Court of Appeal on Tuesday.

Last year Hewitt, 76, was found guilty on two counts of rape and one of sexual assault after three women testified that he took advantage of them while he was their tennis coach in the 1980s and 1990s.

One of the women said that Hewitt had assaulted her when she was just 12 years old.

In delivering a guilty verdict Judge Bam went into detail about the seriousness of rape, but also took Hewitt’s age and health into consideration.

“If he had been convicted in his 50s, he would have received at least a 20-year jail term,” Bam said.

The judge said justice must be seen to be done, even for ageing offenders, adding that Hewitt was not terminally ill and could be treated in prison for his heart condition.

He also emphasised that the two children, who he raped were at a tender age, a most aggravating circumstance and also criticised Hewitt for showing no remorse.

Hewitt’s bail was previously extended and is said to be living at his home in the Eastern Cape.

Miranda Friedman from Women and Men Against Child Abuse said members would be travelling to Bloemfontein to attend court proceedings on Tuesday.

The lobby group said it wants the appeal to be thrown out of court and for Hewitt to start serving his jail term.

Born in January, 1940, Hewitt is a former professional tennis player from Australia. In 1967, after marrying a South African, he became a South African citizen.

Hewitt achieved 7 titles in singles and 65 in doubles, including winning all Grand Slam doubles titles, both in men’s and mixed doubles and being central to South Africa’s only Davis Cup title in 1974.

In 1992, he was inducted into the International Tennis Hall of Fame, but was indefinitely suspended from it following his sexual harassment investigation in November 2012.