Highs of 42 expected to continue as heat wave hits SA 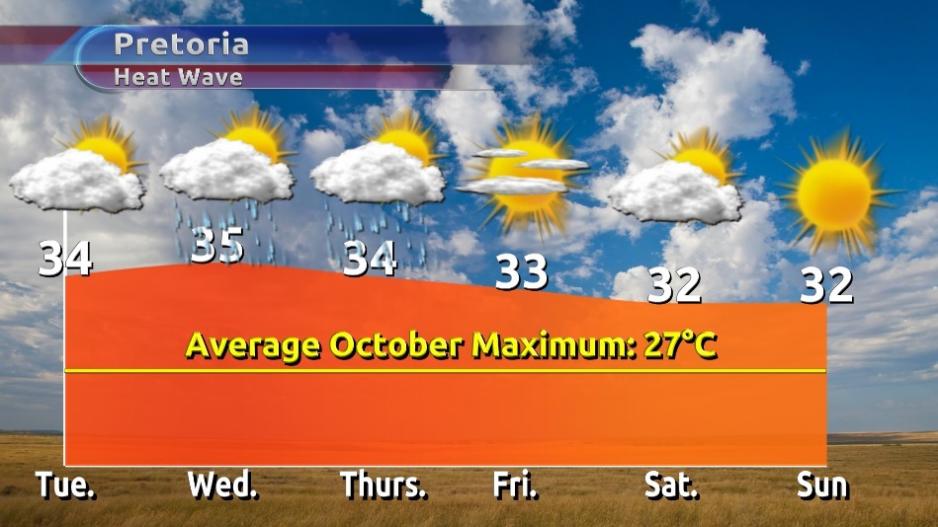 The graphic above shows the weather forecast for Pretoria until Sunday 11 October. The heat wave started on Sunday and is expected to carry on to at least Thursday.

JOHANNESBURG - The current heatwave over Gauteng, as well as parts of Limpopo and Mpumalanga, is expected to continue to through to Thursday, eNCA&39;s weather department said on Monday.

It defined the phenomena as a period of consistently high temperatures which are at least five degrees higher than the average maximum of the hottest month.

Maximum temperatures observed for Monday afternoon for some cities were 37 degrees Celsius in Pretoria, 33 in Johannesburg, 36 Mbombela, 33 in Polokwane 33 and a high of 42 in Skukuza.

ER24 has urged people to stay in the shade and keep hydrated at all times.

The emergency medical service provider warned in a statement that heat exhaustion could lead to serious complications including heat stroke which could be life threatening.

eNCA&39;s weather department said to be safe from the heat wave people need to stay out of direct sunlight, drink a lot of water, wear light and loose fitting clothing, and apply sunscreen .

“Keep a close eye on babies, the elderly and children. Ensure they stay well hydrated as well.” the ER24 statement read.

In addition there is a warning for extremely high fire danger conditions over Gauteng, Free State, North-West province, southwestern parts of Limpopo, eastern parts of Northern Cape and northern parts of the Eastern Cape.