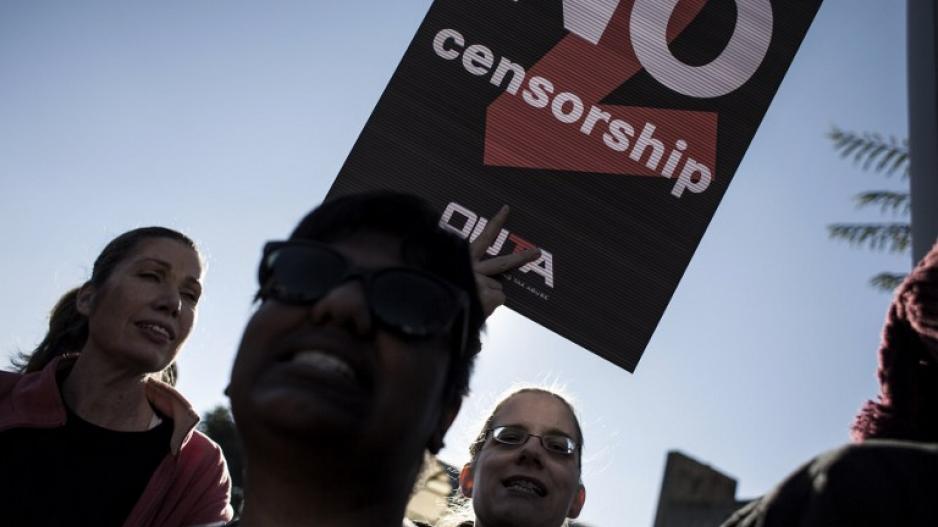 Demonstrators rally outside the offices of South Africa's public broadcaster on July 1, 2016 in Johannesburg to protest against alleged bias and self-censorship in news coverage ahead of key municipal elections.

The SABC rejected Icasa’s recommendation on Monday that it lift its unilateral ban on showing footage of violent protests.

"The SABC staying defiant actually destroys the institution … a defiant public broadcaster is in itself a contradiction. Someone must whisper in their ear [SABC] that they cannot be a bull in a china shop," said Mantashe.

Motsoeneng and the SABC board are sticking to their guns, saying the decision to ban footage showing violent protests is not going to be reversed at recommended by Icasa.

Motsoeneng told reporters in Auckland Park that "no one tells the SABC what to do".

However, Mantashe said that stance was "mistaken posturing" by Motsoeneng.

"SABC is a public institution that reports to Parliament. The dissemination of information is important, an ignorant society cannot be democratic," said Mantashe.

On the Icasa ruling, Mantashe said the SABC ignored a chapter nine institution "at its own peril".

"Icasa is a chapter nine institution, and has the authority to make certain decisions and recommendations … you defy those decisions, you will learn the hard (way) … that is all I can say."

The ANC last week said it was going to meet Communications Minister Faith Muthambi over the matter on Monday.

But Mantashe said Muthambi did not attend the ANC national working committee (NWC) meeting as scheduled on Monday.

"I see that some report her absence yesterday as a defiance … a couple of people were absent from the meeting yesterday, I can go through their list, you cannot single out one person. Her absence did not stop the committee from doing its work."

Mantashe said the NWC reaffirmed "the correctness" of the ANC communication subcommittee’s position against any form of censorship being imposed at the public broadcaster.

The NWC had also welcomed Monday’s ruling on SABC by Icasa, he said.