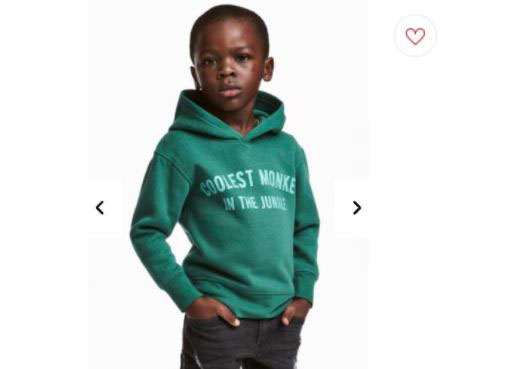 Pictures of a child model for international clothing store H&M emerged on social media, where a black boy is wearing a sweater that reads "Coolest monkey in the jungle".

JOHANNESBURG - Social media was abuzz on Monday, following a racial controversy about a recently-launched clothing line for children by retailer H&M.

The advert appeared on the retail company’s United Kingdom website.

The H&M boy&39;s clothing catalogue shows a black boy modelling a sweater that refers to him as a monkey. On the adjacent page, a white boy is shown wearing one that calls him a &39;survival expert&39;, which caused furore on social media, with some users labelling it as &39;racist&39;, &39;offensive&39; and &39;distasteful&39;.

UK publication The Evening Standard said H&M had apologised for the ad and removed it from its website.

This is disgusting & degrading putting this little boy in a hoodie that says coolest monkey in the jungle! Knowing the history of people associating black people with monkeys! Who approved this? @hm @hm @hm pic.twitter.com/W4boZFx4Fs

"Coolest Monkey In The Jungle“ on a black child? Hebanna pic.twitter.com/QP0Z96C6Me

@hm this is disgusting & irresponsible. You know the history of racist using the term “monkey” to demean people of African descent... and you put this on your website! “Coolest Monkey In the Jungle” SMH pic.twitter.com/IY877D2d8R

Dear @hm,
Here’s why your ad has caused outrage: There is painful history of dehumanizing black people by comparing us to monkeys and apes. Your ad features a black child in a sweatshirt that says “coolest monkey in the jungle”. 1+1=2 You should have known better boycottHandM

After causing a lot of controversy for putting black boy in a hoodie that says "coolest monkey in the jungle"... H&M deleted the picture on their UK website. pic.twitter.com/K1vO55RD7I

Those H&M designers really all sat there and thought having a black kid model a hoodie that says "Coolest Monkey in the Jungle" was a good idea. Smh. https://t.co/9fH6t32fhd