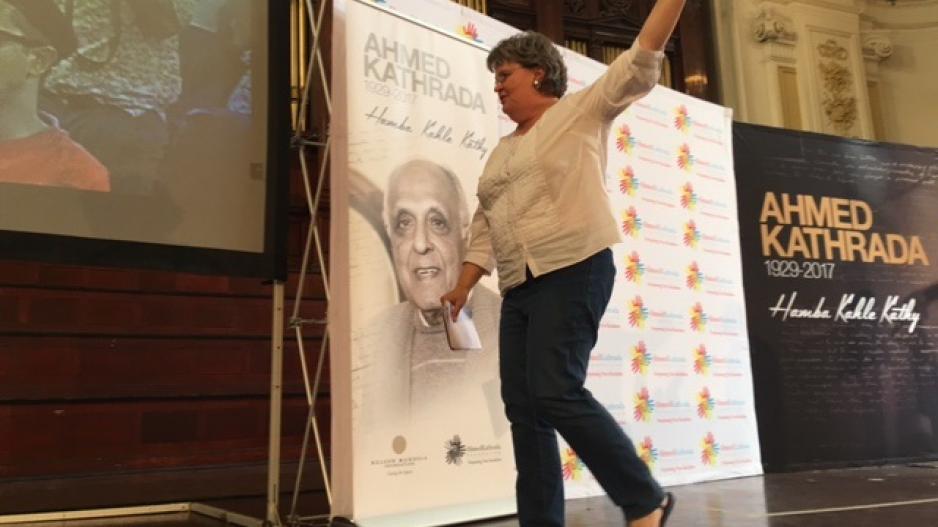 Barabara Hogan, widow of Ahmed Kathrada, leaves the stage after an impassioned speech at his memorial at the Johannesburg City Hall on 1 April 2014.

JOHANNESBURG - Ahmed Kathrada’s widow, Barbara Hogan, launched a scathing attack on President Jacob Zuma at a memorial for her husband on Saturday.

“You have sacrificed everything we have stood for, on the altar of corruption, greed and more greed," she told Zuma from a packed Johannesburg City Hall.

Zuma was not present.

Hogan -- herself a veteran anti-apartheid activist -- asked rhetorically whether he had ears to hear and eyes to see the poor and unemployed in the country.

Hogan "Mr. President Do you see them eating out of dustbins? "#kathrada

"… If you had ears to hear, you wouldn't have appointed four finance ministers [in less than two years] and wouldn't have recalled Pravin {Gordhan] from an international roadshow.

"You would not be pursuing a new killer deal that will be the destraction of all of us. And you would have fired [Communications Minister Faith] Muthambi and [Social Development Minister] Bathabile Dlamini. ...

"And finally, Mr President, if you had ears to hear and eyes to see, you would stepped down as Kathy {Kathrada} requested."

The last sentence was greeted with loud applause and chants for Zuma to go.

Hogan had earlier spoken about how Kathrada had, at just 34, gone to jail knowing he would die there.

She said the memorial was a celebration of those of his generations who had led South Africa out of the wilderness and into democracy.

*Watch Hogan's full address in the video above.