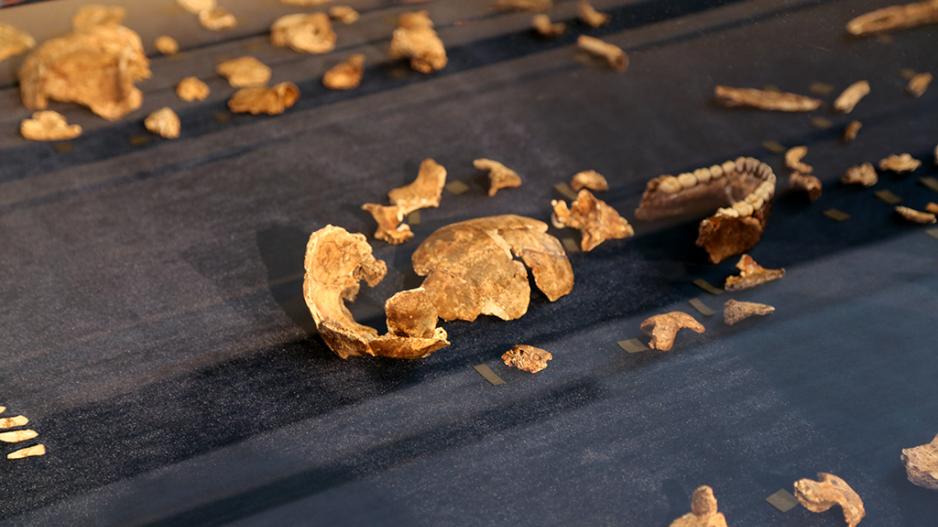 Original fossils of a new hominin species, Homo naledi, on display at the Cradle of Humankind on 10 September 2015.

He was speaking during an interview on eNCA DSTV 403, on Friday morning.

During the interview, he told eNCA anchor Joanne Joseph, that he was speaking as an intellectual and researcher.

"This thing is inconsistent with reality and supports the theory that we are subhuman. That&39;s why Africans aren&39;t respected by the rest of the world," he said.

He explained the western materialist theory, which states that "we are subhumans who developed from the animal kingdom. Therefore they (the west) gave us the title of subhuman beings to justify slavery and colonialism."

PHOTO:  A replica of the Homo naledi skull held up by Deputy President Cyril Ramaphosa and Palaeoanthropologist Lee Berger at the announcement of the new species on 10 September 2015 at the Maropeng Visitor Centre. Source: eNCA/Bianca Bothma

The discovery of more than 1,500 fossil elements in the Rising Star Cave 50 kilometres from Johannesburg made international headlines on Thursday 10 September 2015.

The species was described by Professor Lee Berger as surprising because it contains primitive and human-like features and appears to have buried its dead in the deep, difficult to reach Chamber of Stars in the cave.

University of the Witwatersrand Vice-Chancellor Adam Habib said that the discovery was profound in that it shows the origins of common humanity which is significant in a world where humankind is fighting with each other.

Deputy President Cyril Ramaphosa said that the discovery will help to unlock knowledge about our past.

Ramaphosa said that Homo naledi proves that the Cradle of Humankind is the umbilical cord of our humanity.

However Motshekga disputes this, saying African literature shows that humankind&39;s origins are at the source of the Nile river and that humanity existed before the universe was formed.

"Africa is the most ancient civilization which produced abundant literature about our origins – but this was suppressed by the west to promote that Africans are subhuman," he said

The Homo naledi fossils will be on display at the Maropeng Visitor Centre in the Cradle of Humankind until the middle of October.

Watch this video interview with Professor Steven Churchill of Duke University. He explains some of the fascinating characteristics of Homo naledi: