eNCA Polls: How accurate were they? 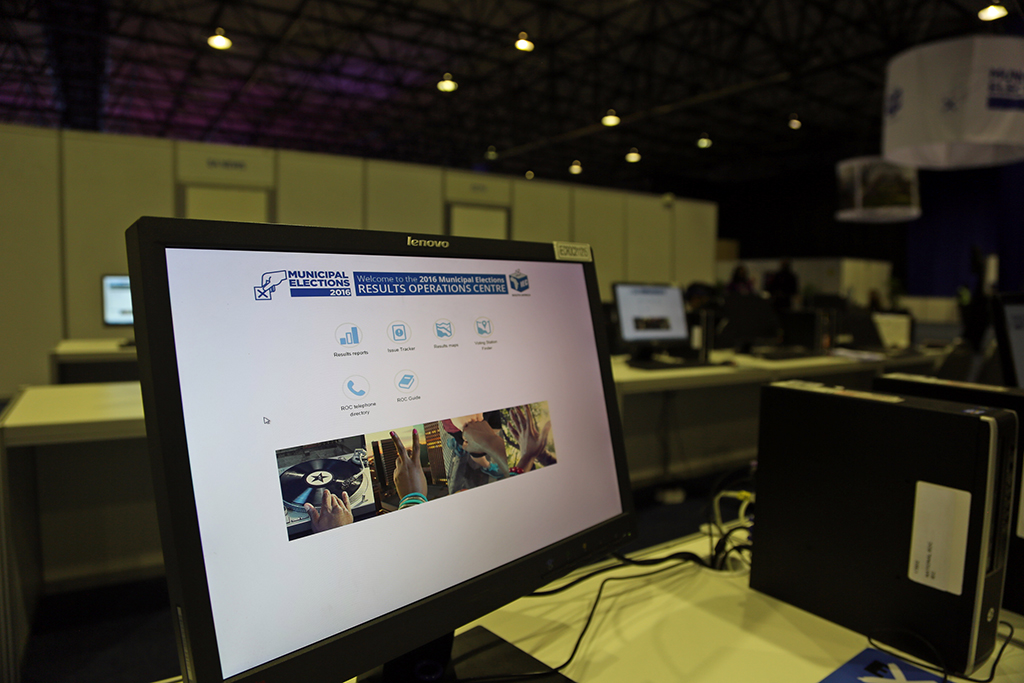 A work station at the IEC's national results operations centre in Pretoria.

JOHANNESBURG – With voting over and the results counted in the 2016 local elections, it&39;s emerged that the eNCA/Ipsos pre-election polls were pretty close in terms of trends, but not exact with regards to figures and margins for wins and losses.

In the City of Johannesburg, City of Tshwane and Nelson Mandela Bay, the poll correctly predicted that no party would win a majority with a more than 50 percent majority.

“I think it&39;s important that every step of the way you need to say with your hand on your heart, this is the best we can do,” said Harris.

Harris says this poll pointed out what’s been clear for a long time, that “the powerbase of the ANC lies in rural areas.”

In Nelson Mandela Bay, the poll results predicted from week one that the Democratic Alliance (DA) would win more votes than the African National Congress (ANC).

The poll also correctly predicted the final outcome, that the DA would win more votes than the ANC by a difference of about six percentage points, as seen in the infographic below.

The DA won 46.71 percent while the ANC won 40.92 percent once the final IEC results were in. The infographic below compares the difference between the final Ipsos poll and the final results from the IEC.

In the City of Johannesburg, the eNCA poll consistently predicted that the results would be too close to call between the ANC and the DA.

The race for Johannesburg was so close, that counting of the final votes continued after the IEC made their final election results announcement on Saturday night.

It remains to be seen who will govern the City of Johannesburg, as intense coalition talks are set to take place.

Final IEC results, like the final eNCA poll results, showed the ANC ahead of the DA in Johannesburg.

The ANC won the most votes with 44.55 percent while the DA won 38.37 percent in the municipal elections. The infographic below compares the difference between the final Ipsos poll and the final results from the IEC.

It’s expected that the DA and the ANC will seriously consider consulting the Economic Freedom Fighters (EFF) for a coalition, because they hold significant power with 11.09 percent of the vote.

DA leader Mmusi Maimane declared an early victory in the capital city on Friday afternoon, before 100 percent of the votes were counted. The infographic below compares the difference between the final Ipsos poll and the final results from the IEC.

The eNCA poll predicted week-on-week that the DA was significantly ahead of the ANC, however the final poll of polls showed that the race would be too close to call in the capital.

he final week’s poll, which included a face-to-face component, showed that the ANC were ahead of the DA with a lead of four percentage points.

The margin of victory for the DA, once vote counting was over, was small with the party obtaining 43.11 percent compared to the ANC&39;s 41.22 percent.

The roll of polls in South Africa

The eight week poll was criticized widely by South Africans who accused eNCA of bias towards the DA.

"Polls are a standard part of democratic elections globally, ensuring that citizens are fully informed of where things might be headed. It is important to realise as well that polls can’t predict exactly what will happen, and they are seldom 100 percent accurate, but they do allow us to take the temperature and gauge the political mood," he said.

Harris, who has worked on every Ipsos poll since 1994  said their methodology was correct, but that polls still have a long way to go in South Africa.

“We have the correct recipe but we do need to work harder on getting public buy-in so that the public is more ready to believe you.”

“The point is polls are not something you just grab out of thin air, it’s a science; but you need to know a lot of politics.”

“In the end you need to be brave,” said Harris "and not be afraid to tell people what they don’t want to hear".

Ipsos conducts two polls a year in South Africa and Harris said that people should pay attention to polls, not only just before an elections.

“It&39;s part of life in a democracy. It&39;s important to tell South Africans what other people like them think and feel. It builds on that shared experience of South Africans", said Harris.

Harber said, "I am proud that we did them, and hope they can become a regular feature of future election coverage."

"We learnt a lot from this process that will ensure we do it better next time," he said.

Findings are from two series of studies:  the pre-election polls conducted for the eNCA and the findings of Pulse of the People™ studies.

This project has been undertaken in the eight weeks before the local government elections. Some 3,000 voters were recruited using RDD (Random Digit Dialling), representative of eligible voters in Johannesburg, Tshwane and Nelson Mandela Bay.  Each week at least 1,500 of them were phoned for a five-minute interview.  All interviews were conducted using CATI (Computer Assisted Telephone Interviews) with a representative sample of residents of the three metropolitan areas who have access to a cellphone.

Interviews were conducted on the Monday and Tuesday of each week, data was processed on the Wednesday and results were published on the Thursday.  The purpose of these studies was to measure the “political climate” in the country during the pre-election period, measure the influence of campaigning and things that happened during this period (like the unrest and violence in Tshwane) and contribute to the political discourse in the country.

Pulse of the People:

This study is undertaken by  Ipsos every six months, however, in election years a third round is often added (this happened this year).  A total of 3,861 interviews were conducted from 17 June to 18 July with a representative sample of South Africans.  The margin of error for this sample size is between 0.7 percent  and 1.6 percent.

Results are then filtered by those 18 years and older and whether the respondent is registered to vote. This resulted in a total of 3,142 respondents, with the margin of error confirmed at 0.8 percent to 1.7 percent (for this sample as a whole).

Some of the questions in the Pulse of the People™ study have been asked since 1976 and questions about the opinions on political leaders and parties have been included 1990.

This study is done through face-to-face interviews using CAPI (Computer Assisted Personal Interviews) in the homes and the home languages of respondents. A process of stratified random sampling is used to determine the choice of respondent and interviewers do not have any influence on this process.