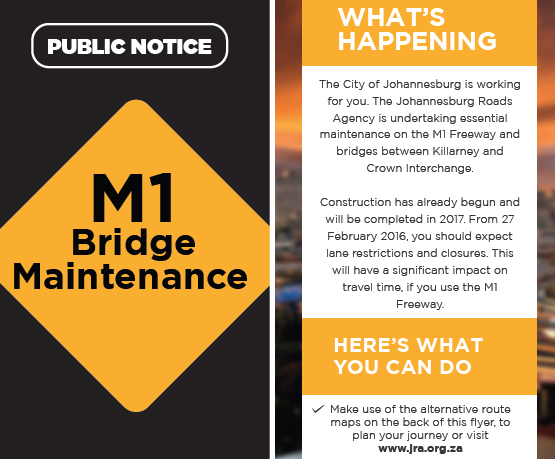 A Johannesburg Road Agency poster alerting the public to the M1 rehabilation project.

JOHANNESBURG –  Motorists should add 30 minutes to their travel times when the revamp of bridges on the M1 continues, the Johannesburg Road Agency (JRA) said on Thursday.

Upgrades on three bridges on the M1 freeway are to enter the second phase shortly.

This will have a major impact on traffic

Lane restrictions will be as follows according to the Johannesburg Road Agency:

The two sections of the highway will be affected most are the double-decker section between Carr and Anderson streets and the Oxford and Federation bridges.

The rehabilitation will be complete only in 2017.

Johannesburg councillor Christine Walters, a member of the mayoral committee (MMC) for transport, said the project is part of the city’s strategic investment of more than R100-million over 10 years.

The acting managing director of the JRA, Mpho Kau, said that major work especially needs to be done to the double-decker, but at no stage will it be closed permanently.

“We may need to close two to three lanes of southbound carriageway for a seven-day period to allow for major repairs and concrete to set,” said Kau.

The city is advising commuters to plan trips well in advance – and to use public transport.

PHOTO: Lane restrictions on the M1 near the Oxford Road offramp in Johannesburg due to major rehabilitation being done by the Johannesburg Road Agency. Courtesy JRA.

“Taxis transport 72% of people across this city.  If you’re not fussy, use them,” said Walters.

“Taxis are not only for black people – I even use them sometimes,” she said.

Problems such as accidents or vehicle breakdowns will be dealt with immediately to reduce queues and traffic back-up.

Wayne Minaar, chief superintendent of the Johannesburg Metro Police Department, said: “All the contractors will have tow trucks on standby to remove cars blocking the road due to traffic incidents,” he said.

.@MyJRA advises motorists to do the following for the M1rehab: Plan your journey. Use alternative routes. Consider public transport. @eNCA