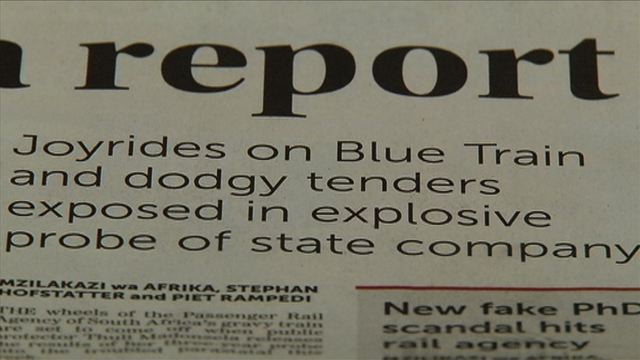 Prasa appointed KG Media to produce an online magazine, Hambanathi, and Kwela Express, a newspaper it uses to communicate with passengers.

JOHANNESBURG – Acting Prasa CEO Collins Letsoalo has slammed as "ridiculous" a Sunday Times report that stated that he was seeking a 350 percent increase in salary.

He said the article was part of an onslaught against him, accusing the media of aligning with people who are trying to bring down the Passenger Rail Agency of South Africa (Prasa).

Letsoalo was briefing journalists in Johannesburg on Monday morning about the claim.

He said he has been reliably informed that there would be two more articles on him -- this coming Sunday and the following week.

He read excerpts from his letter of deployment from the Department of Transport out loud to journalists and stated “Paragraph three on page two… (The company) will pay you at the annualised salary rate applicable to this post and in accordance with the applicable remuneration policy of CTC [cost to company].”

The acting CEO said the letter stated that he was entitled to all benefits applicable to senior management.

He offered to make a copy of the letter available to the media.

He would continue to fight corruption and nepotism in Prasa despite the onslaught against him, which he expected would intensify.

No number of attacks would allow him to deviate from the cause, Letsoalo said.

Prasa had complained to the editor of the Sunday Times about the behaviour of the journalist before the article was published, and requested the right of reply, but they were told that the newspaper had decided to go with the story as it was, Letsoalo said.

Letsoalo said that Prasa was in a better state today than in the past and he had no doubt it would be in an ecen better state in the future.

”One day when I am at liberty to talk, I will tell you the real truth behind the matter,” a calm Letsoalo said.

“I remain a proud, incorruptible public servant …no amount of front-page attacks are going to worry me much,” he added, saying that he would never seek what he was not entitled to.

He said he would provide evidence that there were people behind the newspaper article who were trying to do to undermine him.

Prasa had an “irregular expenditure of R13.9-billion, (and) resistance when you try to change that is expected,“ Letsoalo said.

As a student of systems analysis he knew that “when you’re trying to uproot a system there's a thing called system resistance', but they would continue to fight.

He said that when he had taken the responsibility of acting group CEO of Prasa he had had no allegiances.

Letsoalo said he would decide with his lawyers whether to go to the Press Ombudsman or pursue other avenues regarding the article, but he wanted the weekly to say in bold “Sunday Times gets it wrong” and make it a front-page article, not a small apology on the back pages.

The Department of Transport said in a statement on Monday that it had instructed the Prasa board to investigate the newspaper claims.

"The Department of Transport expresses concern on the allegations as contained in the Sunday Times media report titled 'Mr Fix-It ups his own pay by 350%'," it said.

Prasa was told to report back on the matter by Friday, 3 March.