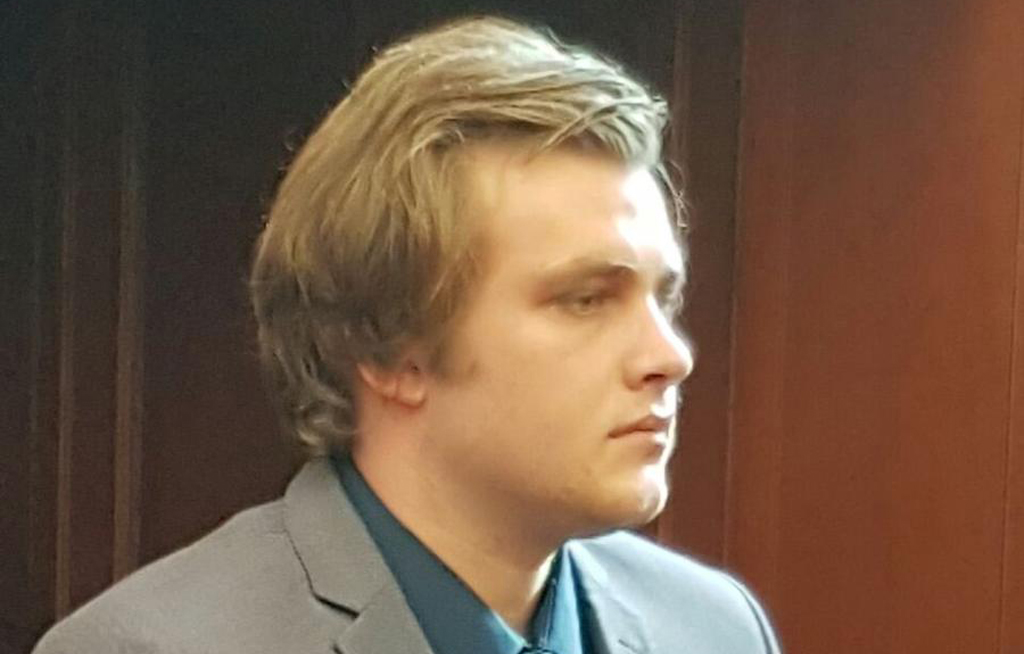 CAPE TOWN – The first police officer to arrive at the Van Breda family home on the De Zalze Winelands Estate on 27 January 2015 told the Western Cape High Court on Monday that he had smelled alcohol on the breath of the accused, Henri van Breda.

Sergeant Adrian Kleynhans was the first to testify in the case against Henri van Breda, who is accused of the axe killings of his parents and older brother.

The 22-year-old has pleaded not guilty to three counts of murder, one of attempted murder and one of defeating the ends of justice.

The axe used to kill his parents, Martin and Teresa van Breda, and older brother, Rudi, was entered as exhibit one on Monday.

His sister, Marli , who was 16 years old at the time, suffered severe brain injury but survived the attack. She has since returned to school, but has retrograde amnesia and therefore cannot recall the events of that night.

Parallels here for me here at vanBreda trial and Oscar Pistorius trial. Wealthy family, security estate, intruder who takes nothing...

Kleynhans was the first police officer on the scene on the night of 27 January 2015.

Testifying in Afrikaans, he told the court that when he had arrived at the house with his gun held at a 45-degree angle, he had seen Henri van Breda come out of the house and had instructed him to sit on the ground.

The accused had “appeared emotional, like he was blowing off steam, and was nervous, but wasn’t crying”.

The police officer had found no evidence of forced entry, but also no evidence that someone had cleaned the crime scene.

He said nothing had looked out of place on the bottom level of the house. A laptop and handbag, with cash still in the wallet, were on the table. In Kleynhans’s experience it was not a typical scene of a burglary, where everything is usually "deurmekaar (all over the place)".

VanBreda: Kleynhans says he was struck by how "normal" house seeemed. Nothing disturbed. Laptop on table.

Kleynhans said he had seen one of the women moving a leg and told his superior to contact paramedics. After they arrived, the scene had been cordoned off.

White walls of 1.3 metres high surrounded the house, but none had had scuff marks on them. Kleynhans said a black gate with a key in it, which would have been used by the intruders to exit the property, had been closed.

He had also seen emergency numbers stuck on the fridge. The axe and the knife used in the attack had been shown to him. While he recognised the axe, he said he did not recognise the knife.

VanBreda says in his plea explanation he thinks there were two attackers and one was Black. pic.twitter.com/RKl1JT3SoB

Judge Siraj Desai described the axe as one used for chopping wood, about half a metre in length.

Earlier, Van Breda had entered his plea explanation, describing step by step his version of how the evening had unfolded. He said he had watched a movie with his brother and father. They had gone to sleep and he had continued watching an animated movie and playing games on his phone.

Later, he had been playing games on his phone when he had gone to the bathroom, and that was when, he claimed, he had heard loud bangs. When he had opened the door, he had seen his brother being attacked by a “laughing” axe-wielding intruder, he said.

His father had then confronted the man and was also attacked. He had heard his mother shout, “What is going on?” The attacker, he claimed, had seemed “unconcerned” about his presence.

He further claimed he had wrestled the axe away from the man and been “surprised by how easily I disarmed him”.

The man had also had a knife and had cut and slashed at his chest, also cutting Van Breda’s left arm, he said.

Van Breda said he had managed to strike the attacker with the axe and flee the room. Van Breda recalled his brother writhing on the bed. He had also heard angry voices, speaking in Afrikaans.

Marli and his mother were lying on the landing.

Van Breda said he had then fallen down the stairs. The kitchen door was open and he believed there had been at least two attackers.

He said he wanted to call emergency services, but had no idea of the number, so called his girlfriend instead. She didn’t answer.

He had then found an emergency number but had failed twice to get through. When he had finally got through from the landline, he had tried to remain calm. He said he had spoken calmly in case the operator did not understand his Australian accent.

He had gone outside to show the ambulance service where the house was. When police officers had arrived, he had told them to go upstairs.

Police had taken his clothes, leaving him in his boxer shorts. His stab wounds were dressed.

Van Breda had told the police he thought the intruder was a black person, he said.

Police had told the doctor attending to him that they thought his wounds were self-inflicted. At the police station, the air conditioning had been turned up, so he had been “freezing cold”.

He said the police officer had told him he did not believe a word of his “bullshit story”.

Van Breda said that by the time he had signed his statement, he had been exhausted and in shock and had not been warned of his rights.

An inspection-in-loco is expected to go ahead on Tuesday, but it is unlikely the media will be allowed access to the Van Breda.

Kleynhans is expected to finish his evidence-in-chief on Wednesday.

Van Breda appeared exhausted throughout proceedings, stifling several yawns and glancing at the clock. During the tea adjournment, he discreetly took two puffs of an e-cigarette.

He is currently out on R100,000 bail. In terms of the law, if found guilty, he will lose his claim to half of his parents’ multimillion-rand estate.