We want Zuma out, proclaim protesters 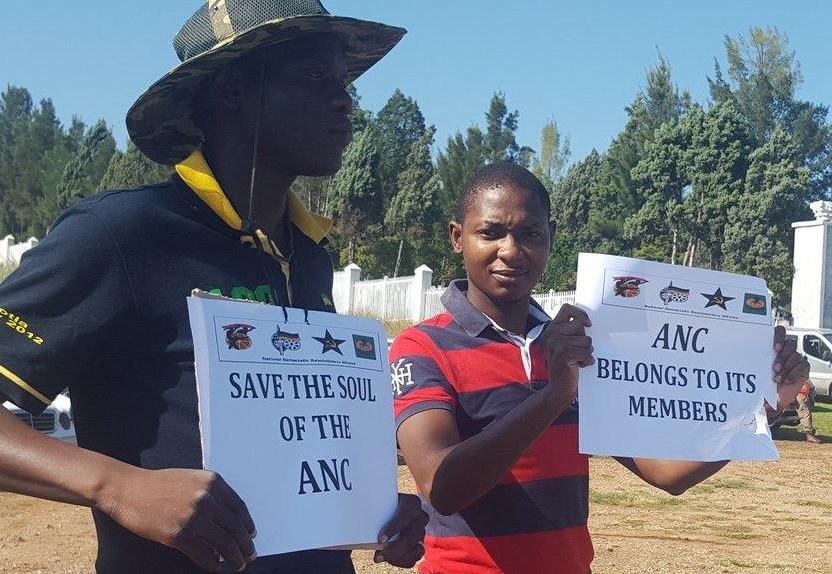 Less than 10 protesters were waving placards on the pavement adjacent to the hotel where the ANC NEC is taking place.

PRETORIA - "Number one must fall!” a protester shouted outside the St George Hotel in Pretoria on Saturday morning as several vehicles entered the venue for the African National Congress national executive committee (NEC) meeting.

By 10am, less than 10 protesters were waving placards on the pavement adjacent to the plush hotel. The placards were held high as the presidential motorcade drove into the premises at speed.

Ronald Lamola says &39;This is ANCNEC last chance to remove Zuma. If they don&39;t, South Africans must stand up & act&39; pic.twitter.com/IeSolhoZXZ

“This is the last warning shot to the ANC. If they don’t fire or remove him this weekend society must stand up and remove him,” said Lamola.

Some placards proclaimed “We want Zuma out”, “Third force is Guptas”, and “Save the soul of the ANC”.

Tshwane metro police officers, ANC marshals, and some armed men claiming to be police officers approached journalists and told them to immediately remove their cars from the open space near the venue.

“This is a space for police officers,” shouted one officer.

Many vehicles drove into the premises escorted by police vehicles flashing blue lights.

On Thursday, ANC secretary general Gwede Mantashe was asked by journalists if the NEC delegates had been put under pressure by repeated calls from senior politicians to act on the alleged interference of the politically-connected Gupta family in decisions taken by President Jacob Zuma and some of his Cabinet ministers.

Mantashe said the 90-member NEC was not under pressure at all.

Among others, Deputy Finance Minister Mcebisi Jonas dropped a bombshell on Wednesday by confirming reports that the Gupta family had approached him to take over as finance minister a few days before Zuma fired Nhlanhla Nene from the post.

Also this week, former ANC MP Vytjie Mentor said Zuma was present several years ago when the Guptas offered her the post of public enterprises minister, held at the time by Barbara Hogan.