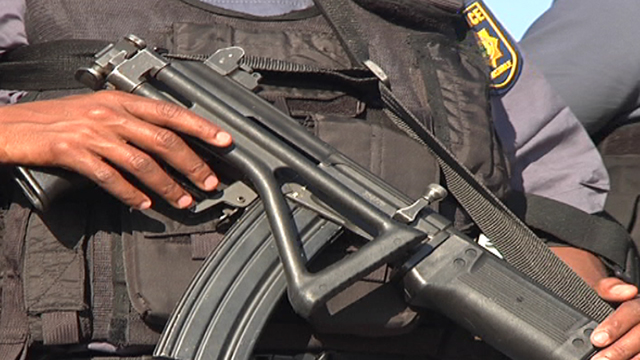 Johannesburg, 18 May 2015 - While the country awaits the release of the report into the Marikana massacre, two former SAPS commanders have said theyre willing to face the music.

New National Police Commissioner Khehla Sitole was not in attendance, though.

The briefing took an unexpected turn when a number of serious issues in the Saps came to light, including that some police officers cannot read or write.

It also emerged more than 1,000 convicted felons are employed by the police.

Kohler-Barnard: over 1000 convicted fellons were employed by SAPS. Seriously, how are you allowing this? PoliceStrategy

SAPS says educational qualifications is a problem. There are some members who cannot read and write. MPs are livid PoliceStrategy

A Saps official says, it&39;s the reality that exists. This is why we want a study to determine the magnitude of the problem- lack of literacy PoliceStrategy

Groenewald: police minister says there are only 12 white members in SAPS and has encouraged more white people to apply. But why would any white person want to join, there aren&39;t much future prospects PoliceStrategy

Emam: raises concerns about the theft of fire arms. He says he is disappointed that SAPS has not mentioned how they will tackle this PoliceStrategy

Emam: relationship between SAPS and Justice does not exist. You can&39;t win this war. I can take you to Mitchells Plain and show you how many kids have not seen the walls of a school PoliceStrategy

The committee, in a statement released after the briefing, said the turnaround strategy must be measurable.

“Efforts aimed at improving our policing and combating crime are always welcomed. However, the committee and indeed the public must be able to assess the implementation of such a plan,” committee chairperson Francois Beukman said.

The committee added the strategy must address basic policing issues like proper equipment, officers taking proper statements and the carrying of pocket books.

The deputy president of the SA Policing Union, Tumelo Mogodiseng has reacted to the allegations of some police officers being illiterate, saying the union finds it insulting.

One researcher says the illiteracy of police officers leads to poor service.

According to Dr Johan Burger of the Institute for Security Studies, what the police mean with illiteracy is actually called functional illiteracy.

"What this means is if you have people joining the police force with a matric and so forth, obviously they can read and write, but whether they can do that well enough to perform police functions is a problem and that the subject that’s most criticised," explains Burger.