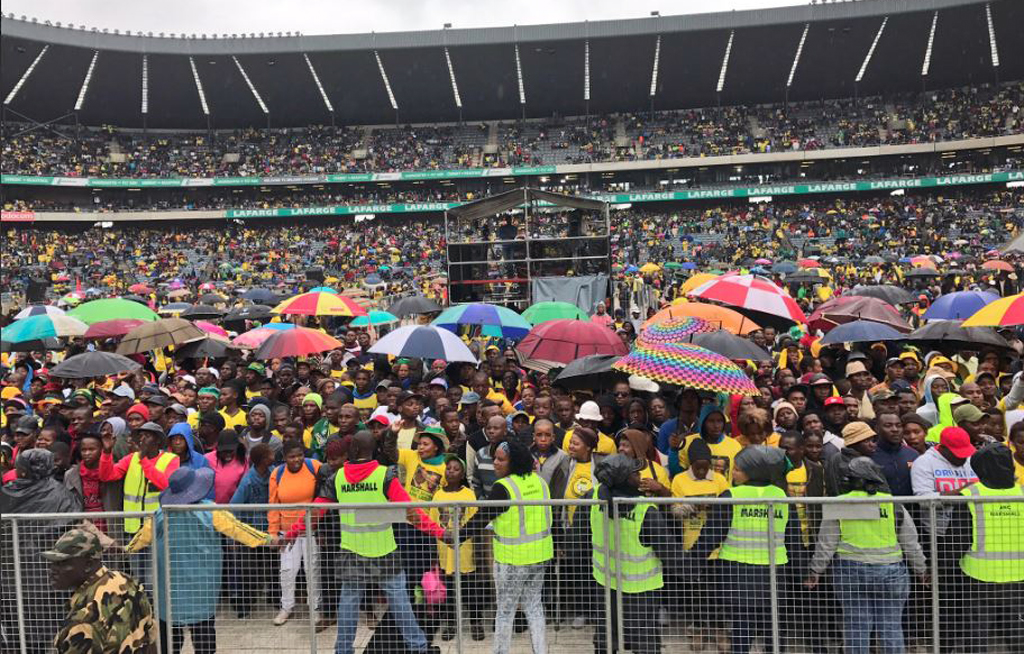 08 January 2017 - ANC members were not deterred by the wet weather and turned up in their thousands for the governing party's 105th birthday celebrations at Orlando Stadium on Sunday, putting on a colourful display of support.

SOWETO - Despite the social media criticism under the hashtag #DontFillUpOrlandoStadium, the African National Congress managed to fill to capacity the 40,000-seat Orlando Stadium in Soweto, Johannesburg, for its 105th birthday celebrations on Sunday.

Torrential rain may also have threatened to spoil the party, but the governing party's faithful made sure the weather didn’t put a damper on the festivities.

When the rain stopped at around 10am, hundreds of people continued flocking into the stadium, making an overflow venue necessary.

Orlando Stadium was so full that supporters were turned away from some sections of the stadium, especially the sheltered pavilion, as those who arrived early had packed it to the rafters to avoid the rain.

But this somehow caused a minor conflict between ANC supporters and security officials manning the entrances and exits to seating areas as crowds were sent back and forth when they wanted access to these places despite them being already packed.

One elderly woman clad in ANC Women’s League regalia grew tired of the runaround and promptly sat down on the concrete floor of the ramp leading to the pavilion. “Ke kgathetse ngwana ka, ke godile (I am tired my child and I am not young anymore),” said the woman while reading the day’s official programme.

Meanwhile, there was a commotion of another type outside the main grounds of the stadium when women supporters flocked into the male public toilets as queues grew unbearable at the female lavatories.

Security guards had to be called to restore order to the stadium’s public toilets despite many mobile lavatories being erected all around the stadium.