INFOGRAPHIC: Which SA university is the most expensive? 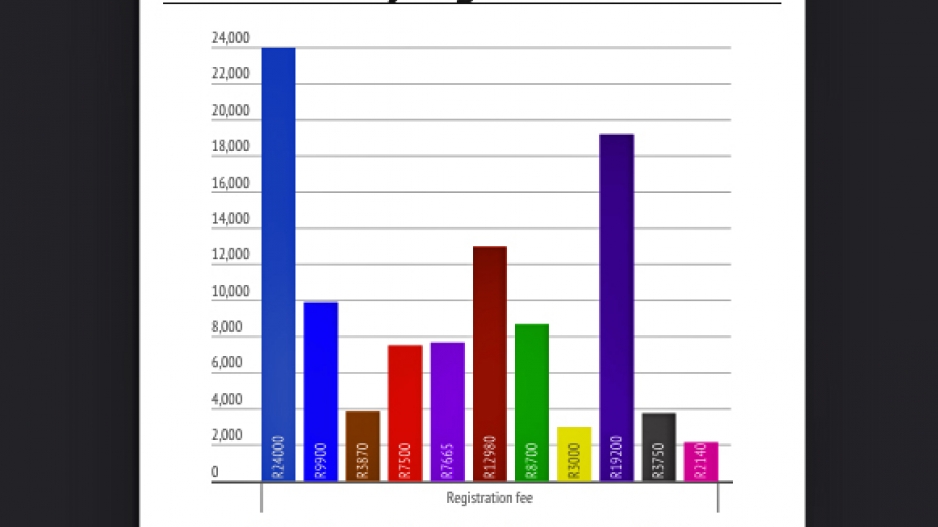 An infographic showing the registration fees, also known as first tuition payment at some of South Africa's universities.

JOHANNESBURG – Just how much does it cost to get a university education in South Africa and which university is the most expensive?

Following three days of protests at the University of the Witwatersrand, eNCA.com has compiled a comparison on the cost of studying at a university in South Africa.

The Wits student SRC organised a mass protest over a proposed 10.5 percent increase in fees which began on Wednesday. Students blockaded the entrance to the university campus in Braamfontein and all classes were cancelled.

"Students&39; fees need to be affordable to allow for greater access to the poor, working class and even middle class families," he told delegates.

However in a statement, Linda Jarvis, chief financial officer of the university, said the 5 percent subsidy from the government is not enough to cover costs.

“We have to make up our income to cover our expenditure in order to remain sustainable. If we do not do so, we put the quality of our academic project at risk,” she said.

The proposed increase of 10.5 percent will not affect two thirds (20,000) of students who are on bursaries or scholarships, said Jarvis.

Wits Vice Chancellor Adam Habib addressed students on Friday morning in a long session, to hear their grievances and work towards a resolution.

The upfront registration fee – or first tuition payment as it&39;s also referred – at Wits is R9,900, which is far less than what students are expected to pay when they register at the UCT or Rhodes University in Grahamstown.

The University of Fort Hare wasn’t included in this chart because their fee structure is not listed on their website.

UCT is by far the most expensive, requiring students to pay R24,000 before stepping foot into a lecture hall.

Earlier this year, student protests erupted at UCT, sparking a nationwide movement calling for the removal of colonial statues.

The Cecil John Rhodes statue at UCT was defaced and later removed.

The campaign spread throughout the country and trended for days on social media with the hashtag, RhodesMustFall.

It is anticipated that the WitsFeesMustFall protests may also spread to other university campuses.

When Rhodes fell, we talked about the invisible statues which needed to fall too. UCTFees are one of those statues. @UCT_SRC @UCTStudent

How is there no protest against UCT fees? UCTFeesMustFall

UCT kids busy campaigning for Wits fees must fall... Do they know how much UCT fees are going to be though

StelliesFeesMustFall we are the only university that pays Internet and washing fees.

Angelo Fick, eNCA commentator, says these degrees are more popular because they have more streams with different majors.

“Professional degrees like medicine or electrical engineering have a more specific programme,” he said.

Generally, UCT was the most expensive followed by the University of Pretoria, North West University and Wits.

Earlier this week the University of Fort Hare issued a notice saying that students would not be allowed to write exams if their fees were unpaid.

Students at Fort Hare protesting against being barred from writing exams due to outstanding fees. FreesMustFall pic.twitter.com/nZ0jtJPYev

In addition to tuition and administration fees, students have to pay for accommodation in a residence or off campus if they don’t live at home. There is also the cost of textbooks, making a university education something that very few South Africans can afford.

University fees are a national issue. They are systematically shutting poor black students out

Fick said it&39;s likely that the protests will spread to other universities.

“Its not just about fees – fees are a symptom of bigger trouble in universities,” he said.

“Universities (like Wits) should explain why their operational costs have gone up as academic salaries haven’t kept the pace with commercial salaries at the same level,” said Fick.