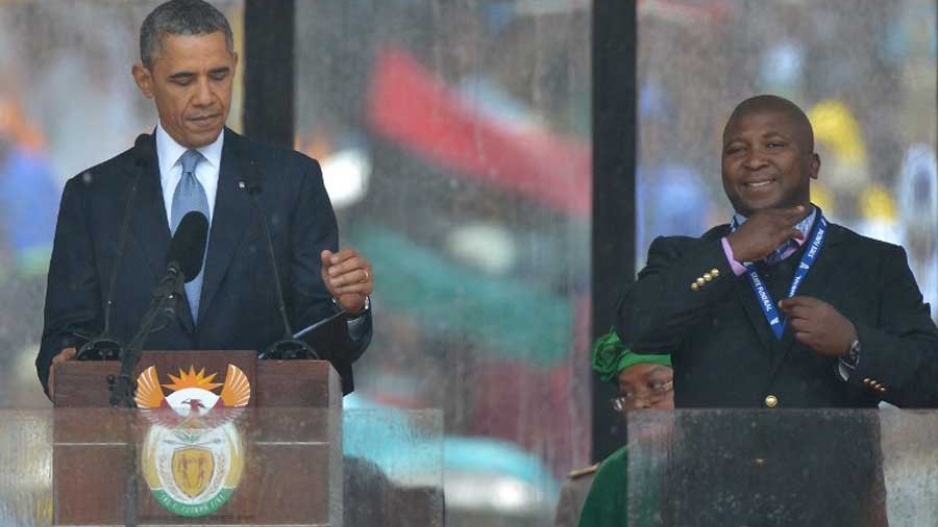 US President Barack Obama delivers a speech next to sign language interpreter Thamsanqa Jantjie (R) during the memorial service for President Nelson Mandela at FNB Stadium.

COPYRIGHT ASSERTED: eNCA asserts its rights in terms of copyright and trademark in relation to this investigative report. Anyone wishing to publish this report or portions thereof is advised to contact us first.

JOHANNESBURG - eNCA can reveal the sign language interpreter at Nelson Mandela’s memorial on Tuesday faced a murder charge in 2003.

It’s unknown if the case was ever concluded as the court file is mysteriously empty.

The man now known by many as the ‘fake interpreter’, stood just a foot away from world leaders, including US President Barack Obama, who is one of the most heavily protected men on the planet.

President Jacob Zuma and leaders from China, Cuba, Brazil and India were also on the stage.

eNCA&39;s investigations have found that Thamsanqa Jantjie, who is being treated for schizophrenia, has also faced rape (1994), theft (1995), housebreaking (1997), malicious damage to property (1998), murder, attempted murder and kidnapping (2003) charges.

Many of the charges brought against him were dropped, allegedly because he was mentally unfit to stand trial.

Jantjie was acquitted on the rape charge, but he was convicted of theft for which he was sentenced to three years in prison. It’s unclear if he ever spent time in jail.

Court records reveal that the 2003 murder, attempted murder and kidnapping case against Jantjie and other people, was referred to the South Gauteng High Court in 2004. It was finalised in November 2006, but the court file for the case is empty.

Jantjie has refused to comment on what happened to the case. The National Prosecuting Authority says it can&39;t confirm or deny the existance of charges against Jantjie.

eNCA was able to establish these facts in less than 48 hours, posing serious questions about the security arrangements at Tuesday&39;s memorial and why the government failed to pick up Jantjie’s past.

During the memorial, it emerged on social media networks that Jantjie wasn’t a properly qualified sign language interpreter and that his signing during that historic event didn’t make any sense.

The story went global and Jantjie was portrayed as a joke.

But this story took a serious turn when eNCA established he was mentally ill.

Jantjie admitted that he was heavily medicated for schizophrenia and has spent time at the Sterkfontein Psychiatric Hospital.