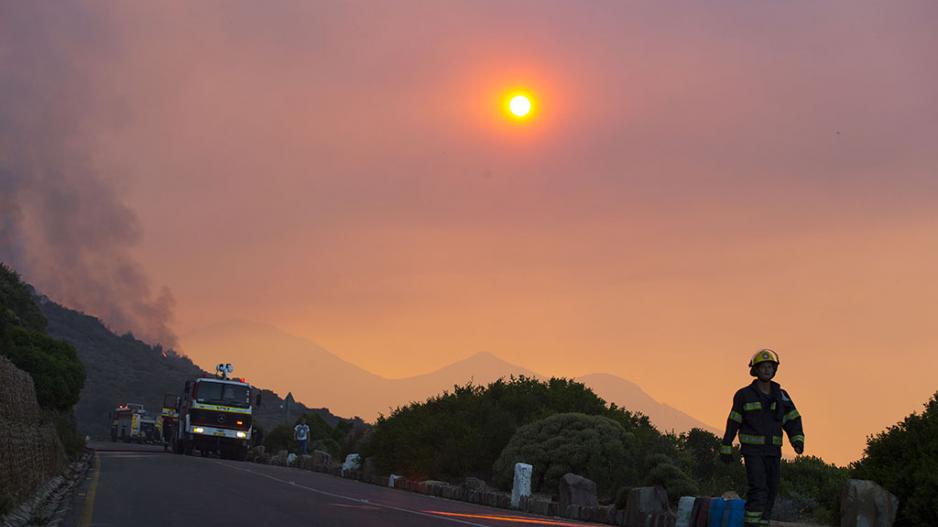 Firefighters work on Chapmans Peak as a fire continues to burn through indigenous Fynbos vegetation on the World Heritage site Table Mountain National Park, three days after it started in Muizenberg, near Cape Town in South Africa 03 March 2015.

CAPE TOWN - Cape Town Weather Services, on Tuesday reported that it was the hottest day the Mother City has seen in a century.

eNCA meteorologist Luis Fernandez said that the Cape Point reached 39.3 degrees and the last time the temperature was this high was in 1917.

He added that there were more towns and cities in the Western Cape that recorded a temperature above 40 degrees than on any other day.

Fernandez said , “While there are many places we cannot say for sure that it is the hottest day in 100 years since observations have not been taken for that length of time, it does seem that many all-time records have been broken, potentially making today the hottest day on record in the Western Cape.”

While the SA Weather Service will release a more comprehensive list of records by Wednesday morning, these are some of the temperatures observed :

Some people uploaded pictures on to social media of temperatures above 50 degrees celsius measured from their cars.

However eNCA meteorologist, Lynette van Schalkwyk, said these measurements were unlikely to be accepted by the World Meteorological Organsiation (WMO).

She said, "(The WMO) has specific standards that air temperature measurements should comply to - measures are taken in the shade and at a height of 2m above the ground,"

"Car thermometer readings can also be misleading since cars are driven or parked on hot road surfaces. Readings also depend on whether the car has been standing still for a while or moving."

These are some of the unconfirmed temperature tweets.

From 42 to 50 Degrees real quick I wouldn&39;t wanna be in those parts of Cape Town right now

Click here to view the interactive map-based timeline about the fire which started on Sunday 1 March in Muizenberg, Cape Town.