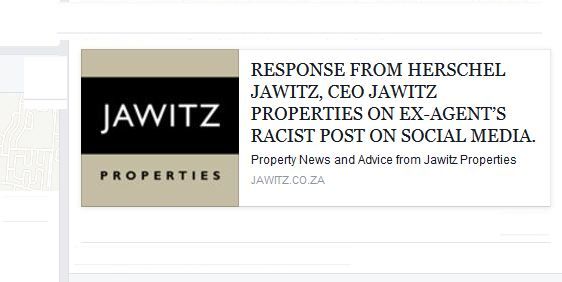 Herschel Jawitz, CEO of Jawitz Properties, responds to racist statements made by an ex-employee of the company.

JOHANNESBURG - The CEO of Jawitz Properties has responded in a media statement to racist statements made by an ex-agent of the company.

Herschel Jawitz condemned Penny Sparrow&39;s comments as unacceptable and said she had ceased to be a company employee in November 2015.

Jawitz said that properties reflecting Sparrow&39;s name on another property website had been updated to no longer associate her with the company.

He said that the company was exploring legal options "to ensure that Penny Sparrow is held accountable for her words."

Jawitz said he felt "both personally and professionally as the CEO of our company the same anger and outrage about these comments as the public," and it was unfortunate his company&39;s brrand had been tainted by the comments.

Jawitz stated, "Jawitz Properties has been operating for many years during which it has built an impeccable reputation in the marketplace.  We would like to strongly emphasise that the racial comments made by the ex-employee were done in her personal capacity and have no reflection whatsoever on our company or its views.

"There is no place for these views in our country, in our society, in our industry and especially not in our Company."

Sparrow&39;s comments have resulted in a backlash on social media, with the majority of comments  condemning her statement.

Dear PennySparrow. I am "fearfully & wonderfully made in the image of God". I still like Bananas though. pic.twitter.com/NCUyYtBKhk

Evil, brainless racists like PennySparrow need to be called out and dealt with, even if we know we are not what they say we are.