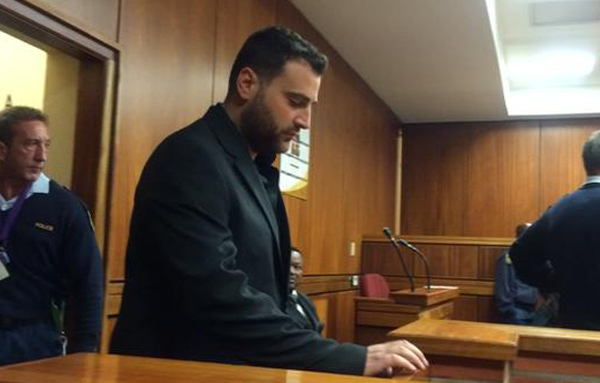 Chris Panayiotou appears at the Port Elizabeth Magistrate's Court on charges related to the kidnapping and murder of his wide Jade, on 4 May 2015.

PORT ELIZABETH - A shell-shocked Christopher Panayiotou has appeared in court as a suspect in the murder of his high school teacher wife, Jayde.

The 28-year-old has been charged with conspiracy to commit murder, murder, kidnapping as well as robbery with aggravating circumstances.

Panayiotou&39;s body was found near KwaNobuhle in Uitenhage on Wednesday, a day after she went missing from her home in Kabega Park.

Her husband, Christopher has opted not to apply for bail and would remain behind bars until his next appearance.

Last week Christopher Panayiotou cried as he spoke of his love for his wife Jayde.

The 28-year-old didn&39;t show any emotion as prosecutors read out the charges against him.

Lawyer Alwyn Griebenow had previously stated that his client wanted to apply for bail.

The second suspect, 31-year-old Thando Siyoli, was arrested earlier this week and also appeared in court.

The case returns to court on June 19.

For a detailed report by eNCA&39;s Specialist reporter, Karyn Maughan, watch the video above.

Correction: Christopher Panayiotou will return to court on 19 June - he&39;s happy to stay in custody until then. JaydePanayiotou