Johannesburg suffocates in shadow of mine dumps 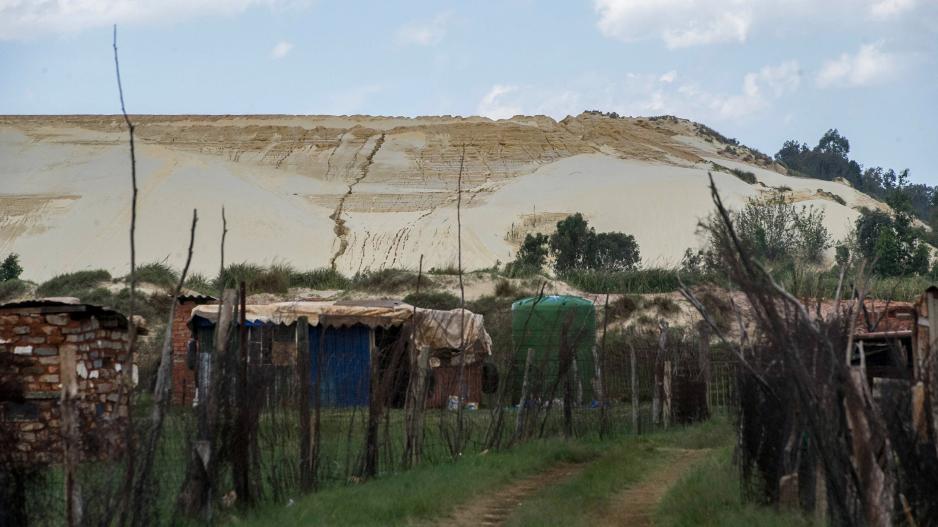 Snake Park is an impoverished suburb on the fringe of one of the biggest mine dumps in Soweto, Johannesburg.

JOHANNESBURG - "Look at my spinach. That is the sand from the mine. The yellow one in the soil -- it&39;s destroying everything," said Thabo Ngubane as he tended his small allotment in Soweto.

In Johannesburg, tens of thousands of poor South Africans like him spend their lives in the shadow of vast mine dumps, exposing them to toxic substances like arsenic, lead and uranium.

The gold rush from 1886 that caused the imposing slag heaps to spring up around South Africa&39;s largest city saw many investors and miners become fabulously wealthy.

The same was not true of those who lived and worked near the pits, and were exposed to dangerous cocktails of dust and chemicals.

They include the one close to where 50-year-old Thabo tends his vegetables in Snake Park in the north of the Soweto township.

"When there is heavy rains, all the mine waste comes here and erodes everything," he said.

When the waste comes into contact with water, oxidation causes an extremely dangerous solution to form.

The company responsible for the slag heap built a storage pool to allow contaminated water to evaporate in an effort to protect the neighbouring homes from pollution.

But the pool walls have been poorly maintained allowing acid water to leak into Thabo&39;s agricultural plot for much of the past year.

"I&39;m coughing all the time... My daughter also," Thabo complained. He has no doubt that tainted vegetables and toxic dust are to blame.

His case is far from unique. Several other areas in Soweto, which is home to more than a million and a half people, have also fallen foul of Johannesburg&39;s mining legacy.

Twenty kilometres east in Riverlea Extension 1 is a community of 2,500 people including Rose Plaatjies whose home is surrounded by three mine dumps.

Rose, a retired labourer, has been there since 1962 when she was forced to move to comply with the apartheid-era rules on segregated living.

Black people from the region often moved to Soweto while "coloureds" like Rose moved to Riverlea.

Now 63, she suffers from shortness of breath and is dependent on an oxygen tank -- all of which she blames on the mines.

During the dry months of July and August, wind blows tons of dust from the mounds onto the streets, coating laundry, sweeping into homes and contaminating food.

"In almost every street in this community, people are living on oxygen machines," said David Van Wyck, a researcher at South Africa&39;s Benchmark foundation, a Christian NGO.

More than half of Riverlea&39;s residents claim to suffer from a cough, asthma, sinusitis or tuberculosis according to a report published by Benchmark.

Statistics show that Riverlea is an outlier.

Respiratory and cardiac illnesses are far more prevalent among the elderly in the area than in similarly poor neighbourhoods elsewhere, according to the South African Medical Research Council.

The Council also found that the yard at the local school had abnormally high levels of lead.

"A lot of people suffer from skin complaints like eczema... as well as asthma," confirmed a local doctor who declined to be named.

But in the absence of any large-scale study, authorities are wary of blaming the conditions suffered by the local population on the waste heaps that encircle them.

"There are no studies that make a direct link, to our knowledge, to the exposure there and the health problems that people are experiencing," said council member Angela Mathee.

Such research would be the responsibility of the central government, which has not yet commissioned such a study, she added.

Efforts by the authorities to contain the contaminants have been described as slow and inadequate by the Harvard International Human Rights Clinic.

Niel Pretorius, the chief executive of miner DRD Gold which owns several mine dumps, has previously said on social media that he "will remain sceptical about these claims" until he sees medical evidence.

His company nonetheless paid for plants to be grown on the face of 300 hectares worth of mine dumps in an effort to reduce the exposure of dust to the wind.

"The mine property people don&39;t care about the communities that are suffering.

"No one wants to be reliable or responsible for this mess."