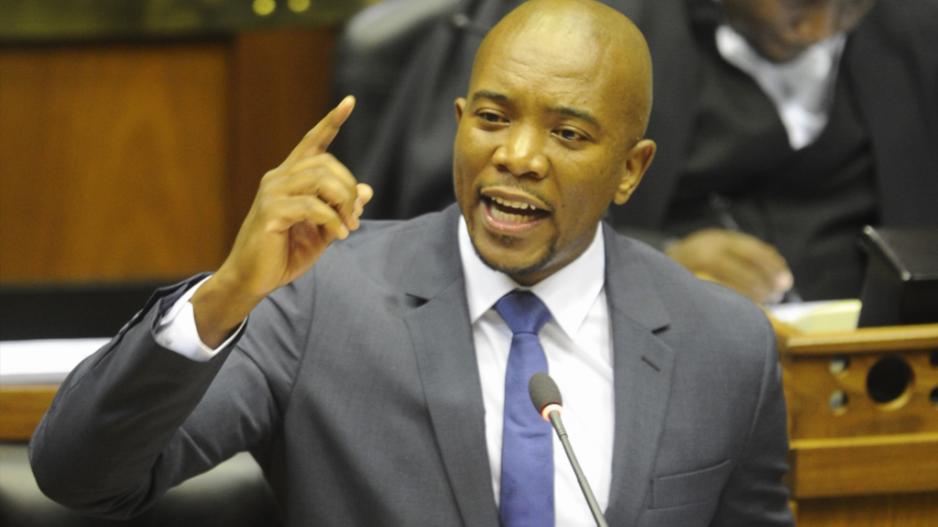 Democratic Alliance (DA) leader Mmusi Maimane speaks during the 2017 State of the Nation Address (SONA) debate at the National Assembly on February 14, 2017 in Cape Town.

“The groundswell of unity among South Africans -- from the clergy to NGOs, from the opposition to senior members within the ANC -- following Jacob Zuma’s hostile takeover of the Treasury and selling of the country to a cabal of looters and liars leaves Zuma with two options – jump or be pushed,” he said.

“Zuma’s self-interested decision to fire capable and trusted Treasury leadership and replace them with servants of corruption has sparked the country into action. Already a petition on noconfidence.co.za has received close to 300,000 signatures and counting, all calling for Zuma to be removed.

"A wave of protests swept across the country’s major capitals of Cape Town and Tshwane. Both the Nelson Mandela and Ahmed Kathrada foundations have spoken out strongly against the ‘the forces of evil, and the rogues, and the thieves who want to steal our country from us,” Maimane said.

Ultimately, it was the National Assembly that had the duty and constitutional authority to remove the president when he did not act in the interests of the country, the people, and the economy. The National Assembly hired Zuma and it was now time that it fired him, Maimane said.

The DA therefore reiterated its call for National Assembly Speaker Baleka Mbete to reconvene the assembly for a special sitting to debate and vote on a motion of no confidence in Zuma.

“It is in the interests of the country and its future that all political parties support the removal of Zuma because in the words of former minister Barbara Hogan, partner to the late Uncle Kathy [Ahmed Kathrada], ‘party loyalty is important, but when we are in as grave a situation as we are in today, the constitution that we love and fought for must take precedence over any lingering notion that party loyalty is above anything’.

“Furthermore, we call upon South Africans to put pressure on their Members of Parliament, especially those in the ANC, to support this move to take back the country from Zuma and the self-serving and criminal elements he has chosen to surround himself with.

“We therefore invite all South Africans to join us on Friday, 7 April 2017, as we take this message to the ANC’s doorstep in order to remind [Deputy President] Cyril Ramaphosa, [ANC chief whip] Jackson Mthembu, [NEC member and axed tourism minister] Derek Hanekom, and others of their primary duty to the people of South Africa and the Constitution. One man cannot hold 56 million South Africans hostage,” Maimane said.