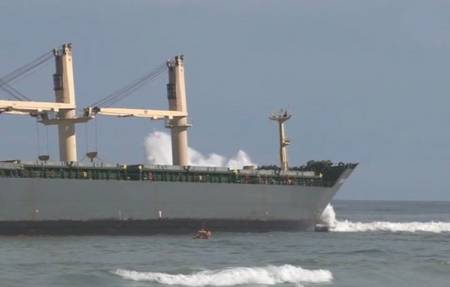 Oil started leaking from the cargo ship Kiani Satu, which ran aground off Buffels Bay near Knysna last week.

KNYSNA - The cargoship that ran aground last week near Buffels Bay in Knysna is now afloat, the SA Maritime Safety Authority (Samsa) said on Saturday.

"At 11.20am today (Saturday) she came off. I am so excited I cannot think straight," Samsa spokesman Captain Nigel Campbell said.

The 168-metre bulk carrier, Kiani Satu, ran aground at dawn last Thursday forcing the captain and his 19-member crew to abandon ship. It developed mechanical problems in heavy seas while carrying 330 tons of fuel oil and 15,000 tons of rice.

The vessel was moved 70 degrees towards the sea during the week. It had now come off the sandbank and was afloat away from the shore.

Campbell said there were 12 salvage experts on the ship who were managing the boat amid the bad weather conditions.

"The weather is abysmal," Campbell said.

On Friday, the Knysna municipality said it planned to airlift about 600kg of spoiled food off the ship.

Joint operations centre spokeswoman Athane Scholtz said the food was no longer fit for consumption and would be disposed of under controlled waste removal procedures.

On Thursday, Samsa pumped the fuel oil from the ship&39;s engine room to higher parts of the vessel. There were no further reports of oil in the water and leaks from the ship.

Campbell said at the time the safest way to remove more than 300 tonnes of fuel oil from the ship was to fly it off in plastic tanks.

Scholtz said over 350 experts were working to address the oil spill, which affected the Goukamma nature reserve and marine protected area.

"Preparations for a major clean up will only happen once the ship has been removed -- once the full impact of the spill has been assessed and the ship is out of the area and no longer a spill risk.

"This is to ensure minimum impact on the environment as continuous removal of little bits of oil is counterproductive and places unnecessary pressure on resources."

Precautionary measures were in place to protect estuaries at Goukamma, Swartvlei, and Knysna.

Scholtz said 35 oiled penguins had been rescued, cleaned, and sent for rehabilitation. There were no reports of bird or animal deaths near the ship.

The joint operation centre thanked the Garden Route and Western and Eastern Cape residents for their donations and offers of help.