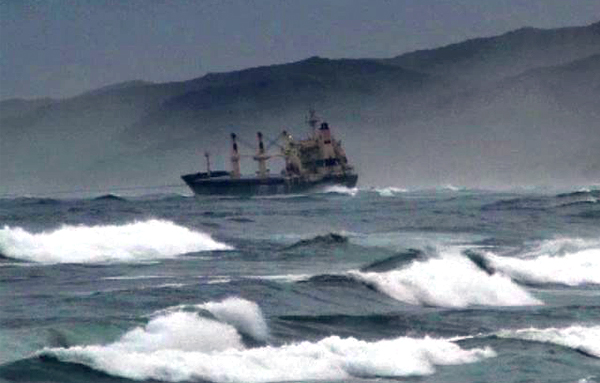 Impending stormy weather will either float the Kiani Satu, stranded near Knysna, or cause it to break up.

Earlier attempts to get the vessel off the rocks have failed.

The cargo ship ran aground with engine problems last week and is now leaking oil, causing fears of an environmental disaster to grow.

The Garden Route National Park is working to protect this stretch of coast from a disaster. The Goukamma Estuary and Swartvlei river have been bulldozed closed. As a further precaution, booms are being placed at inlets to prevent any oil from spreading.

Local residents have expressed fears the local ecosystem will be affected.

South African Maritime Safety Authority spokesperson Nigel Campbell said the ship’s owner have insurance that could cover the costs of the operation. “We are working on a wreck removal program. The owners are insured and they have limited insurance in US dollars that would allow us to remove all traces of the wreck.” Campbell added that returning the location to pristine condition would be a very expensive procedure.

The vessel needs to be afloat in order for the crew to pull it 10 nautical miles offshore, where it would be well clear of the fishing grounds.