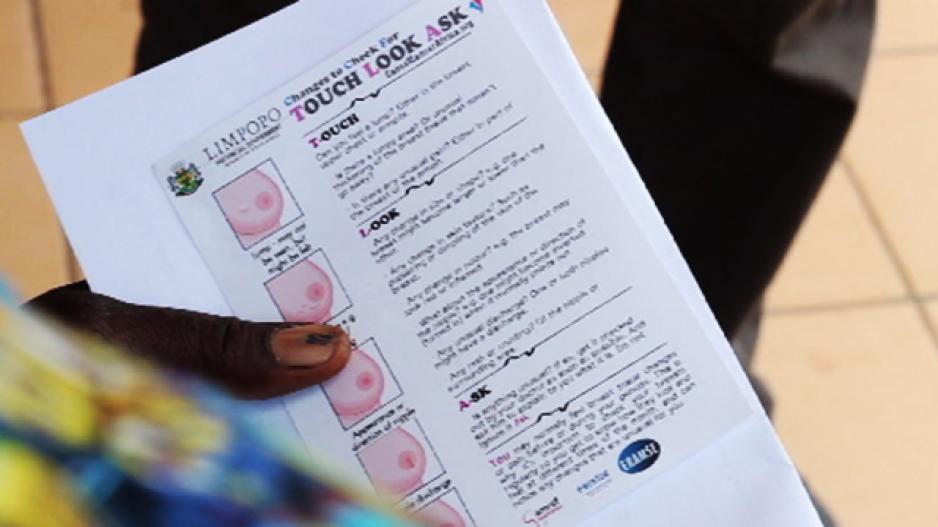 Johannesburg, 16 March 2015 - More than 2000 languages are spoken across Africa. The vast majority have no word for cancer. A British NGO is raising awareness about breast cancer, which many believe is a Western disease.

DURBAN – The KwaZulu-Natal health MEC Sibongiseni Dhlomo will have to explain the deaths of hundreds if not thousands of cancer patients who were left to die without having ever received any treatment at all.

A damning report by the South African Human Rights Commission (SAHRC), released on Monday, revealed that cancer patients at government facilities in KwaZulu-Natal, the country’s second most populous province, will wait at least five months before they get to see an oncologist.

The report further reveals that if cancer radiotherapy is the recommended course of treatment, patients admitted to KwaZulu-Natal Health department hospital will have to wait a further eight months – meaning that it will be 13 months from diagnosis before a patient receives cancer radiotherapy.

The provincial health department has seen an exodus of experienced oncologists ever since it decided back in 2012 not to pay a maintenance contract for two state of the art cancer radiotherapy machines at its Addington Hospital in the province’s largest city of Durban.

First to quit after 30 years of service was Professor Amo Jordaan, the head of oncology who was instrumental in obtaining the two Varian Rapid Arc Linear Accelerators, which cost R120 million to install at Addington. He quit in protest at the department’s failure to keep the machines running.

The two machines had brought waiting periods for cancer radiotherapy at Addington Hospital down from five months to two weeks.

International guidelines recommend that patients receive treatment within 28 days. KZN patients, according to the department’s own submission to the SAHRC, will wait more than a year.

The SAHRC has ordered the department to immediately repair the two machines and clear the existing backlog of treatment – exactly how it will do this is unclear, given that the department no longer has any oncologists in Durban and only two in Pietermaritzburg.

According to the report, the provincial health department sees some 2,500 patients annually. How many of those failed to get to see an oncologist or cancer radiotherapy treatment timeously is not known.

“It is not in dispute that the respondents are aware of the crisis in respect of Addington and IALC Hospitals and throughout the KZN province. Being aware of that crisis, the Respondent(s) had at the very minimum a duty to take reasonable measures through recruiting sufficient staff, and putting in place effective screening, diagnosis and treatment of cancer throughout the KZN province.”

The SAHRC also recommended that an investigation be conducted by the Health Ombudsman and that KwaZulu-Natal Premier Willies Mchunu determine whether “the MEC (Dhlomo) as the accountable authority has responded adequately in the provision of interim, short-term and long-term measures in the performance of all functions of the executive that the Constitution and legal frameworks assign to him”.

“The respondents have violated the rights of patients with cancer at the Addington and IALHC Hospitals to have access to health care services as a result of their failure to comply with applicable norms and standards set out in legislation and policies.”

The SAHRC also accused them of denying the patients “inter-dependent rights to human dignity and life”.

Both the Addington and Inkosi Albert Luthuli Hospitals have to advise the SAHRC how many patients have died.

The whole saga surrounding the meltdown in cancer treatment in KwaZulu-Natal started way back in 2012 when the provincial health department, then headed up by Dr Sibongile Zungu, decided not to pay the maintenance contract to TecMed Africa, the company that had installed two state-of-the-art Varian Rapid Arc linear accelerators as part of a R120-million tender.

The tender, awarded under a tertiary sector grant from the presidency, included the five-year R433,000 a month maintenance contract inclusive of VAT, meaning the machines and their installation cost about R94 million while the maintenance contract was worth almost R26 million over five years.

In February 2011, following delays, the first cancer patients started receiving treatment at the Addington Hospital facility. The two machines were so efficient that waiting times for treatment were rapidly cut from eight months down to two weeks, with as many as 100 patients a day being attended to.

At some stage, the relationship between TecMed and the KZN health department went sour.

In a December 2012 interview with The Daily News newspaper, Dr Sibongile Zungu, the KZN health department’s then head of department, claimed that the department had been paying the maintenance contract, but that it could not find the contract detailing TecMed’s obligations.

She told the newspaper that some employees were fired in relation to the tender and that the department was investigating whether the machines had been sabotaged.

“This issue is a web of corruption, lies and deceit. But, we will get to the bottom of it,” she was quoted as saying.

However, it emerged that this was incorrect because the department had in fact already stopped paying TecMed early in 2012 and while staff were indeed fired, it had been for other procurement irregularities happening at the hospital. Their dismissals had nothing to do with the two cancer machines.

TecMed was never given a reason and after nine months of not being paid, the company stopped servicing the machines.

Professor Amo Jordaan, who was instrumental in getting government’s approval for the machines and who headed up Addington Hospital’s oncology department from 1980, resigned in anger and frustration at the department’s failure to keep the machines going.

He is adamant that none of the people he worked with at the hospital or department were dismissed over the tender, as Zungu had claimed.

“I am not aware of any accusations made in court or any person or company sentenced in court for corruption in the oncology contract,” he said.

By late March 2013, both machines had stopped working and Addington Hospital cancer patients were being bussed to Durban’s Inkosi Albert Luthuli Hospital. According to one radiologist, who spoke to the then South African Press Association (Sapa) at the time, the waiting period for treatment had increased from two weeks to five months.

Radiotherapists were so distressed at having to change patients’ care from being curative to palliative. A number underwent counselling at the department’s expense and, following Jordaan, a second experienced oncologist, Dr Neil Narsai, quit as did a number of radiologists.

Since then the exodus has continued with the department having no oncologists in the Durban area. The last oncologist, Dr Thilomi Naidoo, left earlier this month.

The saga over the machines standing idle went public in 2013 with a report by Sapa being widely published and both Carte Blanche and eTV broadcast reports on the saga.

Within days of the Carte Blanche broadcast, Dhlomo called a press conference announcing that the department would pay TecMed but investigations would continue.

Only one payment was subsequently made and by February 2014 the machines were again standing idle after TecMed again refused to continue servicing the machines without payment. The SAHRC report reveals that neither of the two machines was working between August 2014 and March 2016.

It is not clear what happened with the original TecMed tender or if it is even currently being investigated.

Seven years of investigations by police (the Hawks) and forensic auditors have failed so far to show any crime, let alone led to charges. To date, it is not known what the actual allegation is that the Hawks are investigating, and so far nobody from TecMed has been criminally charged. Tecmed has also not been charged.

Complicating the matter is that it is not even clear if there is a police case number for the province’s allegations against TecMed.

A case of urinating in public was one of the case numbers that Dhlomo presented to the KwaZulu-Natal provincial standing committee on public accounts (Scopa), according to the Democratic Alliance’s health spokesman Dr Imran Keeka. Police confirmed this.

Not only that, the department has also provided the same two case numbers to Scopa for two different alleged crimes.

Dhlomo went further to claim at that Scopa sitting that TecMed had installed old machines.

Exactly what he meant is uncertain as the United States Food and Drug Administration only approved the type of machines installed in Addington Hospital in January 2008. Varian only started shipping the RapidArc linear accelerators to customers in the Spring (April/May) of 2008.

At best, the machines were a year old by the time they arrived on South African shores from the factory in Palo Alto, California.

In November 2014, Dhlomo then announced that 50 patients would be privately treated. That was recently revealed to have cost department R2.7 million.

In December 2015, the KwaZulu-Natal health department’s newly appointed head of department Dr Sifiso Mtshali signed a contract with a company called KZN Oncology to get the machines up and running again.

The contract with KZN Oncology broke literally every rule book that the government has on procurement.

Despite being paid R5.695 million in April 2016, KZN Oncology has failed to keep the two machines operating. One has never operated while the other has operated intermittently.

Since early November neither machine has been operating at all.

In a province of more than 11 million people where 87 percent of the population have no option but to seek care from the provincial government, the shutting down of two machines has an immediate and massive impact.

According to SAHRC report, “The Department advised that the average waiting period for a patient to be seen by an oncologist is five months whereas those waiting to receive cancer radiotherapy usually wait a further eight months.” The SAHRC report notes by that stage many cancers have spread with devastating effect.

A complaint was lodged over the same issue of the cancer machines by Professor Jordaan in July 2013. It is not clear what came of that complaint to the SAHRC and Jordaan was not listed as a complainant.

ANA reported on that contract in April 2016. The department at the time refused to comment on that contract and despite repeated requests since, has still not commented on the KZN Oncology Inc Contract.