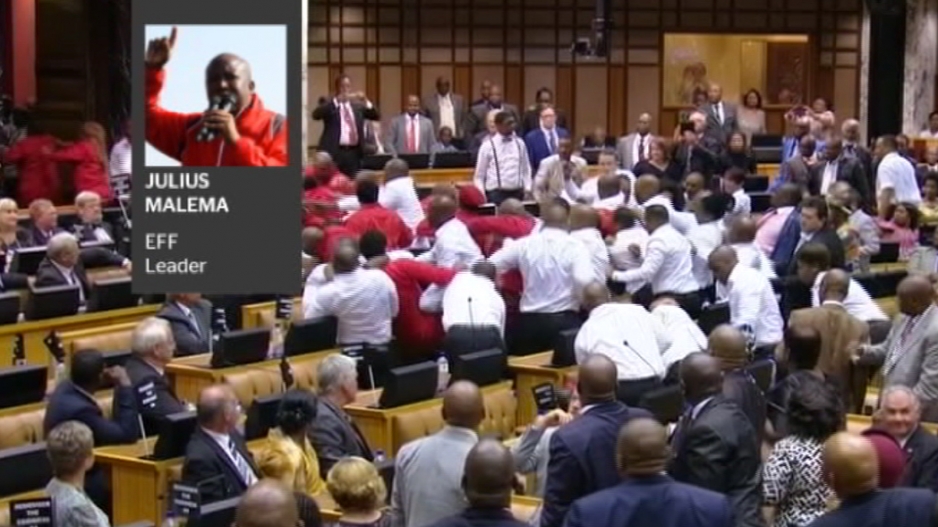 JOHANNESBURG – Members of the Economic Freedom Fighters say they're still recovering after violent clashes during the State of the Nation Address on Thursday night.

After several interruptions to the president's speech, parliamentary security forcibly removed them from the house.

Several of the Red Berets, including leader Julius Malema, say they're still recovering.

LISTEN: Zuma giggles as EFF booted out of Sona

It all began when the party raised concerns about members' safety.

"When you're being attacked, you have a right to protect yourself. We were standing peacefully and not fighting anyone. Bullies came and wanted to bully us. We respond to a bully in a decisive way so that they know we are not a playground.

"We are going to do it again and again to fight any hooliganisms that is metered against us in defence of Zuma who has violated the constitution of SA.

"This strategy is the one that is going to win us votes in 2019 to remove the ANC. A kleptocracy must be removed from government and you don't do it by giving it red roses. You remove it through the programme of action that will win society over and expose the shenanigans of this kleptocracy."

In a statement, Parliament says claims of brutality levelled against parliamentary protection services officials, are unfair, unfounded and baseless.

It says the officials were assaulted while trying to remove unruly MPs from the house.

Members of the public were also affected, with traces of pepper spray discovered in the gallery.

The EFF has vehemently denied claims that one of its members released teargas in the national assembly gallery on Thursday night.

EFF spokesperson Mbuyiseni Ndlozi said: "Absolute rubbish. I said to you that Jackson Mthembu has not been rehabilitated from his spin doctor days.

Parliamentary officials say a member of the public is to blame. And they've vowed to take action against the perpetrator.

The secretary to Parliament, Gengezi Mgidlana, has established a committee to investigate the violence during the Sona.