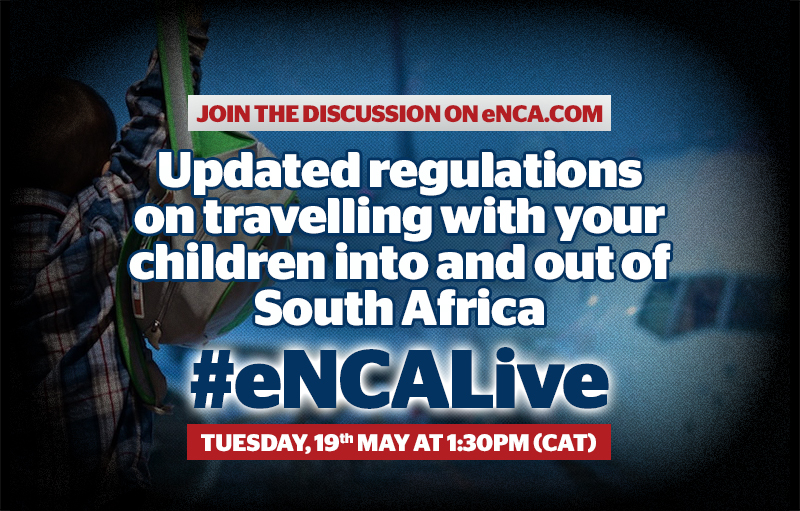 Join us on eNCALive this Tuesday at 1:30PM where we look at the new travel regulations set out by DHA

JOHANNESBURG - In two weeks time, on the 1st of June, Section 7 of the South African Immigration Act (the Act) and its regulations comes into effect and will be implemented at airports and borders across the country.

Amongst a number of updates to the regulations governing the Act, parents/guardians travelling with children will now be required to produce an unabridged birth certificate of a minor to the immigration officer when travelling to, or from South Africa.

Legal guardians will be obliged to either present a Court Order awarding them guardianship of the child in question or if both parents are deceased, they have to obtain permission to travel with the child from the Director-General of Home Affairs.

The Act is intended to make it difficult for parties to remove children from the Republic of South Africa without the requisite knowledge and consent of other parties associated with such children.

Single parents will also be affected.

This week on eNCALive, we speak to Megan Harrington-Johnson, a senior associate at Schindlers Attorneys, and Matthew Fubbs of the Holiday Factory, on the implications and ramifications of the new regulations.

We have extended an invitation to the Department of Home Affairs to provide us with clarity on the issues highlighted in this report and have not yet received any response.

Guests participating in this discussion

Megan has a LLB from the University of Johannesburg. She is currently a Senior Associate at Schindlers, and has been with the firm since 2010. Megan specialises in general litigation where she tends to focus on family law and matrimonial matters. She also practices entertainment law and sports law where she assists various clients in negotiating and drafting contracts. As part of her family law practice Megan handles all matters pertaining to marriage, divorce and access and contact to children. She is also a FAMSA accredited Mediator mediating in a wide variety of disputes with a special focus on divorce and family mediation. Megan has mediated divorces involving estates in excess of Seventy Million Rand and is a strong advocate of the need for this approach in all litigious disputes. Notwithstanding Megan&39;s belief in mediation, her general litigation practice has a strong focus on all types of High Court litigation and she has litigated in matters ranging from landlord and tenant disputes to contractual matters, intellectual property disputes and also public and administrative law disputes.

The South African Immigration Act: The Real Implications on You and Your Child

In two weeks’ time, on the 1st of June, Section 7 of the South African Immigration Act (the Act) and its regulations comes into effect and will be implemented at airports and borders across the country. The other sections of the Act came

In the case where one parent or guardian travels abroad with a minor child, he or she must produce an unabridged birth certificate to the Immigration Officer, and: into effect on 24 May 2014.

i) Consent, in the form of an affidavit, from the other parent, authorising him or her to The Regulations to the Act that will have the most widespread effect on parents and guardians, state as follows: enter or depart from South Africa with the child; or

ii) A court order granting full parental rights and responsibilities or legal guardianship When a child is travelling abroad, the parents, parent, or guardian, are required to produce an unabridged birth certificate to the Immigratiioi)n Officer, when either entering or leaving the Republic of South Africa. The unabridged birth certificate must reflect the particulars of the child and the parents. in respect of the child; or

iii) The death certificate of the other parent registered as a parent of the child on the unabridged birth certificate. Further, in the event that both parents of a child are deceased, the person with whom the child is travelling will be required to obtain permission from the Director-General to do so.

Travelling with a child without the other parent There was uproar when the Act initially came into effect, at the regulations pertaining to parents being required to present their children’s unabridged birth certificates when either entering or leaving the Republic of South Africa.

It appears, however, that most people do not understand the reason for this opposition to the Act, as they are under the impression that they would have to obtain the unabridged birth certificate for all official matters relating to the child regardless of the Act, such as obtaining a passport. The main opposition to the Act, however, involves the requirement of a consent affidavit, and the implication to parental rights as a result thereof, that have the greatest impact on adults travelling abroad with minor children. This will have far reaching repercussions on parents and legal guardians of minor children throughout the country.

Registration of birth and issuing of birth certificates

In order to understand the ramifications of the above, it is important to note that, in terms of the Births and Deaths Registration Act, 1992, all children born in South Africa must be registered within 30 days of their birth. Registration is done by the parent, parents, guardian or any other person legally responsible for the child. The requisite governmental form must be submitted it to the nearest office of the Department of Home Affairs if they are in South Africa, or the nearest South African embassy, mission or consulate, if they are overseas. Once the child’s birth has been registered, an abridged birth certificate will be issued free of charge, usually a day or so after the registration application has been submitted. This will contain only the details of the child and the mother, irrespective of whether the child is born in or out of wedlock. An unabridged birth certificate is only obtained from the Department of Home Affairs by request, and this document reflects not only the child and mother’s names and identity details, but also the father’s name and identity number, if the parents are married. In the event that the parents are unmarried, then the father’s name and identity number will only appear on the unabridged birth certificate with the mother’s consent. A child born within marriage is generally registered under the parents’ married surname. Alternatively the child can be registered under the surnames of the father and mother jointly with a hyphenated surname, where both parents have given consent.

Ramifications for parents entering or exiting

Prior to the Act coming into effect, parents and/or guardians were only required to obtain an unabridged birth certificate for a minor child in order to obtain a passport the child, and nothing further was required. Thus, in instances where an unmarried father was included on the child’s unabridged birth certificate, his consent was only required in order to enable the mother to obtain the passport, but was not required each time the mother attempted to leave the country, as is now the case. This will create huge problems for mothers who no longer have relationships with the fathers of their children which, in turn, may lead to a situation where unmarried mothers are less likely to include the fathers of their children on their unabridged birth certificates. This could lead to even more problems for biological fathers to have their parental rights recognized.

Further implications of the Act

In addition to the problem that parents travelling with children are going to face, legal guardians of children now face an even bigger issue: that they are obliged to either present a Court Order awarding them guardianship of the child in question or, if both parents are deceased, to obtain permission to travel with the child from the Director-General of Home Affairs. It thus seems that it will be imperative for a person appointed as a child’s guardian in terms of a Will to apply to the relevant High Court for an order in this regard. The reason for this is that only the High Court can confer guardianship, as the Children’s Court and Magistrates Court are not empowered to do so. An application to the High Court of this nature will generally be time- consuming and expensive. Further, as required in any matter regarding a minor child, the

Family Advocate’s Office will be required to confirm that such an order will be in the child’s best interests.

Long term implications of the Act

Unmarried mothers are also going to have to be much more careful as to whether or not they include their child or children’s father on the birth certificates. The reason for this is that unfortunately, in the case of a disinterested and absent father; they are going to be affected by that decision for the rest of their lives. Unmarried fathers will also have to insist that they are included on the birth certificates of their children at the time of the birth of the child, so as to avoid a situation where the mother is able to simply remove the minor child from the country without their permission or consent. All legal guardians of children, whose parents have either abandoned the minor child or who have died, will have to take steps to secure their freedom of movement and ability to travel overseas with the minor child. They will have to make an application to the relevant High Court for guardianship orders so as not to limit their own freedom of movement by being unable to travel abroad with a minor child.

Thus, the Act is intended to make it difficult for parties to remove children from the Republic of South Africa without the requisite knowledge and consent of other parties associated with such children. However, all forms of international travel will be made difficult for anyone accompanying minor children, particularly for legal guardians and single parents.

New Immigration Regulations supplied by the Department of Home Affairs