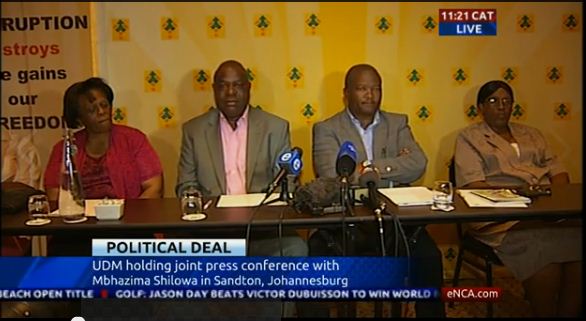 JOHANNESBURG - The United Democratic Movement has held a press conference in Sandton, Johannesburg, to announce that they are joining forces with Mbhazima Shilowa&39;s Cope faction ahead of the 2014 general elections.

It&39;s thought that more than 800 members left out of Cope&39;s national congress will now support the UDM in May&39;s elections.

The group, representing branches from eight provinces, held their own summit in Bloemfontein.

Expelled Cope leader, Shilowa is now leader of the breakaway Cope faction, but he will not be part of the new integration as he is still involved in a legal battle with Cope president Mosiuoa Lekota.

Last month Shilowa failed in his bid to stop a national Cope conference. His urgent court application was dismissed by the North Gauteng High Court.

Shilowa and six other applicants wanted the party&39;s national conference indicted pending the final determination of an appeals process against an earlier court ruling in favour of Lekota.

Lekota was subsequently re-elected unopposed as the president of Cope.