Madonsela confident SCA will vindicate her 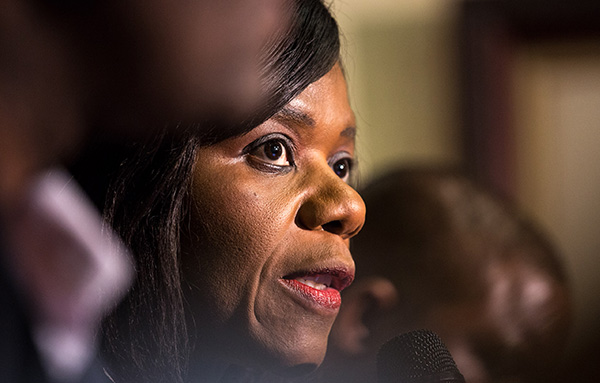 CAPE TOWN– Public Protector Thuli Madonsela said on Friday she was optimistic that the Supreme Court of Appeal would in five weeks’ time clear up confusion about the extent of her powers.

“We have had some challenges as to what exactly is the nature of the powers of the public protector and a lot of it is dealing [with] whether the State should comply when we have found wrongdoing and indicated how the wrongdoing should be rectified,” Madonsela told a meeting of the global council of Advocates International.

“We didn’t fare well in the first judgment,” Madonsela said of Judge Ashton Schippers’s ruling in the Western Cape High Court last year in which he held that her directives were not binding on the executive in the absolute, though they could not be ignored without cogent reason.

Schippers’s first judgment has been tirelessly cited by ministers and senior members of the African National Congress as justification for President Jacob Zuma’s refusal to comply with her directive that he repay a reasonable percentage of the more than R215 million spent on a security overhaul of his private home in Nkandla.

In April, Schippers granted the SABC leave to appeal in the case that saw his original ruling, commenting that he believed it had little chance of success at the SCA but that it was “critical” for democracy that the higher court deliver a definitive judgment on the powers of the chapter nine institution, given the confusion on the matter.

Asked to comment on the Nkandla controversy by opposition MP Steve Swart from the African Christian Democratic Party, Madonsela described the president and Parliament’s handling of her report “Secure in Comfort”, in which she found that Zuma had unduly benefited from the project, as “haywire”.

She reiterated that the legal rationale for Zuma having to submit her findings to Parliament, was that the legislature had to evaluate whether he had adequately complied with her report.

“So the president was supposed to do the right thing and then submit to Parliament and…. government had to evaluate the adequacy of the president’s response."

The process went off script when instead Zuma said he would wait for the outcome of the Special Investigating Unit’s investigation on the Nkandla project, Madonsela said.

“It is a very long story, how it went haywire is basically that the president indicated that he was waiting for an internal executive structure, to make a decision on some of the issues and it made a decision.”

Madonsela stressed that the SIU did not differ from her conclusions, but that its mandate — which it derived from a proclamation by the president — stopped well short of hers in that it was not asked to determine “whether or not the president did anything wrong”.

The SIU found that Zuma and his family had been enriched by the upgrade, which went on to include a swimming pool and cattle kraal that Parliament is expected to accept as essential security features next week when it will likely rubber stamp a report by Police Minister Nathi Nhleko.

“Luckily that institution did not make findings different from ours. Except that institution …on its terms of reference, it had not been asked to investigate whether or not the president did anything wrong. But they confirmed that the inspection of some of those security benefits went beyond what was authorised.”

Returning to her powers, she said these were conferred directly by the Constitution, and inferred that therefore Nhleko — whose report aims to rewrite hers in concluding that Zuma need not reimburse the State — did not have the power to revise her findings.

“Our power comes directly from the Constitution, section 182, we have the power to perform administrative scrutiny. Once something has bolted out of your kraal, and has gone to an oversight institution, your internal structures now are subject to the decisions from the external institution.”

“I think there was confusion here about what is the role of the executive.”

Commenting to the media after her address, Madonsela, whose term ends next year, suggested that Parliament’s role in approving funding for her office should be circumvented as there was a politically-motivated refusal to boost its budget.

“I think it is high time we consider depoliticising the funding of chapter nine institutions because the conversation is going backwards and forwards and we can’t help but think that politics is creeping into it.”