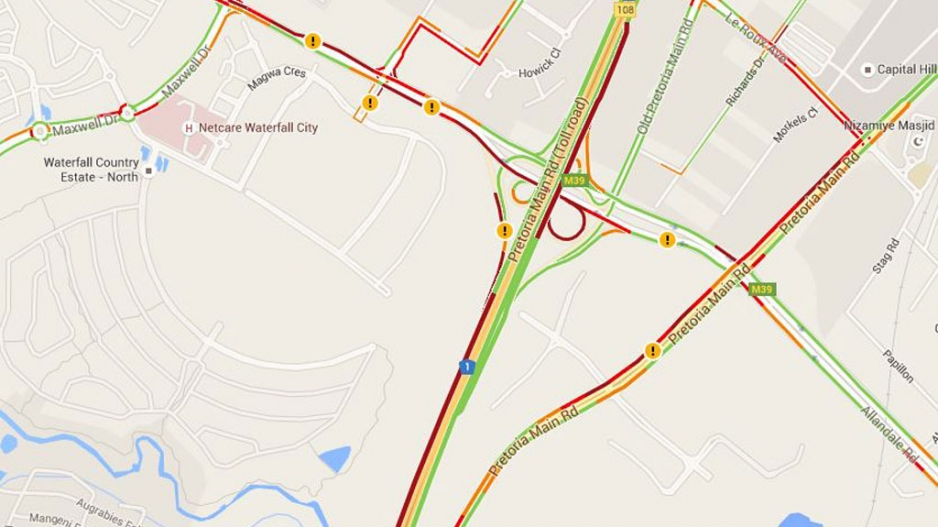 This Google Map shows heavy traffic around Midrand, as thousands of shoppers head to the opening of the Mall of Africa.

JOHANNESBURG – The grand opening of the Mall of Africa caused heavy traffic congestion on the N1 freeway and most roads leading to Midrand on Thursday as thousands of shoppers attended the launch for opening day deals.

Spokesperson from the Johannesburg Metropolitan Police Department (JMPD) Wayne Minnaar said traffic was disrupted from 5am as swarms of shoppers headed to the 6am store openings.

You would not think the economy is struggling... Look at the queues at MallOfAfrica opening!@eNuus @eNCA pic.twitter.com/D6UpVrTjT3

Minnaar said traffic had subsided at the front of the mall but remained congested on the N1 as people continued to use the freeway to access the Allandale Road off-ramp.

“The Metro police officers were deployed to the mall and around the mall for safety reasons and to deal with the traffic,” Minaar said.

Traffic leading to mall of Africa. . . Traffic inside Mall Of Africa. . . What a day pic.twitter.com/qU4FXQoYuD

The Mall of Africa– located in Waterfall City, Midrand – cost R5-billion and consists of 130,000 square metres of space for over 300 stores.

Kindly note that booms are open again, you may also make use of the flyover coming from Pretoria Main Road.

Due to traffic congestion, we have closed the mall parking/booms, & will reopen as soon as traffic subsides. Apologies for the inconvenience

MallOfAfrica & traffic jam overtaken Big Wall of China as biggest man made feature seen from space. Do you see it? pic.twitter.com/Fqa9EkWrjA