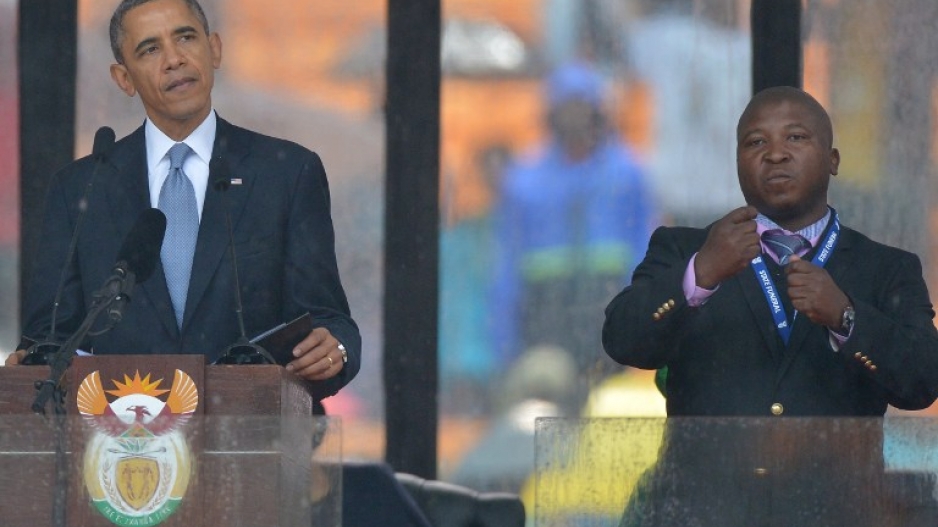 JOHANNESBURG - The man accused of faking sign-language while standing alongside world leaders like U.S. President Barack Obama at Nelson Mandela&39;s memorial service said Thursday he saw "angels" at the event, has been violent in the past and suffers from schizophrenia.

Thamsanqa Jantjie said in a 45-minute interview with The Associated Press that his hallucinations began while he was interpreting and that he tried not to panic because there were "armed policemen around me."

He added that he was once hospitalized in a mental health facility for more than one year.

Jantjie, who stood gesticulating 3 feet (1 meter) from Obama and others who spoke at Tuesday&39;s ceremony that was broadcast around the world, insisted that he was doing proper sign-language interpretation of the speeches of world leaders.

But he also apologized for his performance that has been dismissed by many sign-language experts as gibberish.

The statements by Jantjie raise serious security issues for Obama, other heads of state and U.N. Secretary-General Ban Ki-moon who made speeches at FNB Stadium in Soweto.

"What happened that day, I see angels come to the stadium ... I start realizing that the problem is here. And the problem, I don&39;t know the attack of this problem, how will it comes. Sometimes I react violent on that place. Sometimes I will see things that chase me," Jantjie said.

"I was in a very difficult position," he added. "And remember those people, the president and everyone, they were armed, there was armed police around me. If I start panicking I&39;ll start being a problem. I have to deal with this in a manner so that I mustn&39;t embarrass my country."

Asked how often he had become violent, he said "a lot" while declining to provide details.

Jantjie said he was due on the day of the ceremony to get a regular six-month mental health checkup to determine whether the medication he takes was working, whether it needed to be changed or whether he needed to be kept at a mental health facility for treatment.

He said he did not tell the company that contracted him for the event for about $85 (R880) that he was due for the checkup, but said the owner of SA Interpreters in Johannesburg was aware of his condition.

AP journalists who visited the address of the company that Jantjie provided found a different company there where managers said they knew nothing about SA Interpreters.

A woman answered the phone at a number that Jantjie provided and said it was not for the company, and another phone number went to a voicemail that did not identify the person or company with the number.

Jantjie said he received one year of sign language interpretation at a school in Cape Town, and insisted that he has previously interpreted at many events without anyone complaining.

The AP showed Jantjie video footage of him interpreting on stage at the Mandela memorial service.