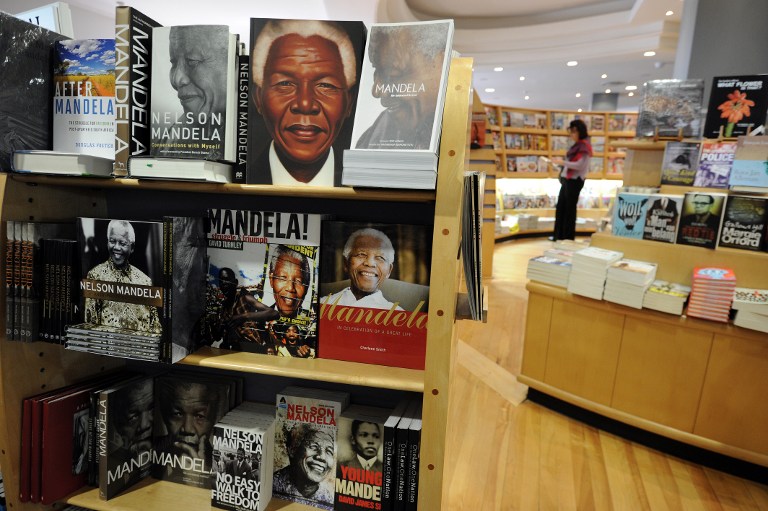 JOHANNESBURG - Nelson Mandela&39;s prolonged illness has sparked intense interest in the anti-apartheid icon&39;s life and times with books, shirts and other "Madiba merchandise" flying off the shelves.

At bookstores across the worried South African nation, stands have gone up to highlight the legacy of the former political prisoner who became South Africa&39;s first black president.

At Exclusive Books in Johannesburg&39;s upmarket Hyde Park suburb, no less than 26 books on Mandela, from his autobiography to speeches, quotations and photo albums, were on display.

"I am kind of ashamed because I had never read it, after all those years," she told AFP.

"He was probably the best leader we could expect. He prevented a bloodshed in South Africa at the end of apartheid and in negotiating a peaceful transition to democracy", she said.

While the 94-year-old peace icon is fighting for his life in a hospital in the capital Pretoria, new book supplies have been ordered.

"There are more buying now, since last week, they have been buying a lot," said book sales assistant Lucy Ngomane.

"It has more than doubled!"

"Yesterday, somebody came in and bought three copies of Long Walk to Freedom, while another took six portraits which costs R570," Ngomane added.

Similar scenes are playing out in the nearby upmarket Sandton business centre, where many tourists pass through on a visit to Johannesburg.

While Mandela&39;s own foundation, on instruction by the father of the South African nation himself, chase down commercial exploitation of his image, it cannot stem the appetite for more, especially now.

The Mandela Foundation itself has its own authorised brand of Mandela clothing which it sells to raise funds for good works.

At the Jacana curio store just off Nelson Mandela Square at the Sandton City shopping centre, a new shipment of merchandise has just arrived.

"We get these T-shirts every year before Mandela&39;s birthday," on July 18, saleswoman Shana Melansky said.

Nearby, onlookers gazed at a giant six-metre bronze statute depicting a dancing Mandela which was unveiled in 2003.

The shirts are made to be sold on the statesman&39;s birthday, also called "Mandela Day" which was officially declared by the United Nations in 2009, when people around the world are expected to follow his example and do good deeds.

One of the T-shirts with Mandela&39;s face and an inscription that reads "The story depends on who wrote it" fetches R240, while another similar one goes for R340.

"A lot of people buy them. We have had a lot of tourists lately," Melansky said.

"Mandela sells!" said clerk Dumi at the Sowearto store, which specialises in colourful T-shirts, especially children&39;s clothing with Mandela&39;s face on it.

Nearby in the Stuttafords chain store, shoppers can pick up garments sporting the "46664" logo, formerly Mandela&39;s apartheid prison number and now the brand for his global HIV/Aids awareness campaign.

Colourful button shirts with patterns, made famous by Mandela in the 1990s during his presidency and called "Madiba shirts" after his clan name, cost R700.

Near one of the stands engineer John Buthelezi hesitates however.

In the capital Pretoria, across the road from the hospital where Mandela has been fighting a recurring lung infection since June 8, Godfrey Mootitsi sells one-by-one square metre printed fabric depicting the peace icon.

Not all those who try to cash in on Mandela&39;s ill health are happy though.

"There are many more people than usual, but they are journalists and they don&39;t buy anything," complained a vendor, who only identified himself as Kony, in front of the great leader&39;s former home turned museum in the township of Soweto.