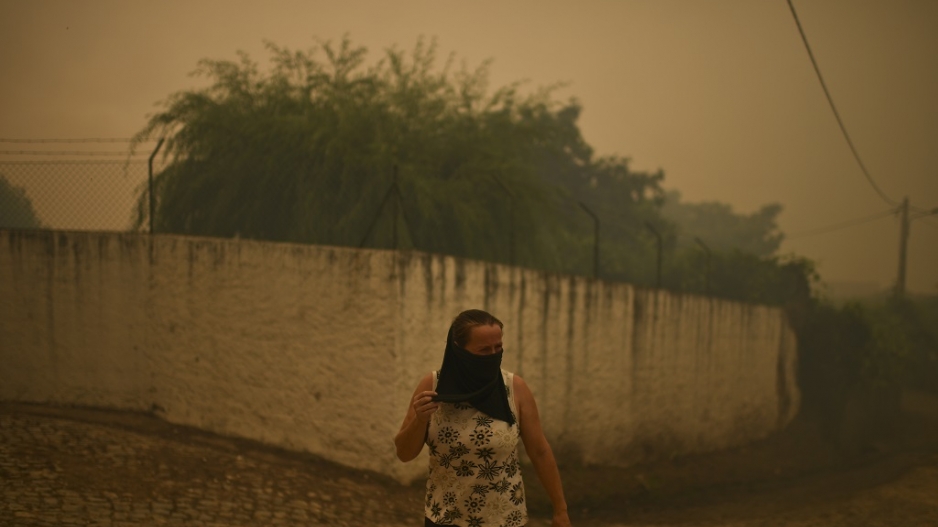 A woman covers her mouth and nose during a wildfire threatening the village of Torgal, Castanheira de Pera, central Portugal, on June 18, 2017.

PEDROGAO GRANDE - Raging forest fires in Portugal have killed at least 62 people, many of them burnt to death in their cars, the government said on Sunday.

It is the worst such disaster in recent history in Portugal.

The fire broke out on Saturday in the municipality of Pedrogao Grande, north of Lisbon, apparently caused by a lightning strike, and spread furiously in several directions.

19 people died on the road surrounded by fire and many more are injured.
People are losing their homes and memories.
Portugal needs help! pic.twitter.com/lbwVVzXcTS

Nearly 900 firefighters and 300 vehicles were still battling the blaze on Sunday afternoon as scenes of devastation could be seen around the town.

"Unfortunately, this seems to be the greatest tragedy we have seen in recent years in terms of forest fires," said a visibly moved Prime Minister Antonio Costa, who declared three days of mourning starting on Sunday.

The expanse of wooded hills that 24 hours before had glowed bright green with eucalyptus plants and pine trees was gutted by the flames.

Sad to learn of tragic loss of lives in the forest fire in Portugal. Deepest condolences to all affected #pedrogaogrande pic.twitter.com/3XugjI9PVO

A thick layer of white smoke hovered over either side of a motorway for about 20 kilometres as blackened trees leaned listlessly over charred soil.

A burnt-out car sat outside partly destroyed and abandoned houses, while a few metres away police in face masks surrounded the corpse of a man hidden under a white sheet.

Police chief Almeida Rodrigues blamed dry thunderstorms, ruling out arson and saying a tree had been struck by lightning.

"Everything burnt very quickly given the strong winds. The flames passed within two or three kilometres of my house," said local resident Isabel Ferreira, 62.

"I knew several of the victims. One of my colleagues lost her mother and her four-year-old girl as she could not get them out of the back of the car."

Secretary of State for the Interior Jorge Gomes said 62 people burned to death, mostly trapped in their cars engulfed by flames.

"It is difficult to say if they were fleeing the flames or were taken by surprise," he said.

More than 50 people were injured, five critically, including one child and four firefighters.

"The number of fatalities could still rise," Costa said. "The priority now is to save those people who could still be in danger."

Portugal was sweltering under a severe heatwave over the weekend, with temperatures topping 40 degrees Celsius in several regions.

About 60 forest fires broke out across the country during the night, with around 1,700 firefighters battling to put them out.

A number of villages were affected by the main fire and homes were evacuated, their owners sheltered in neighbouring areas.

Officials were not immediately able to comment on the extent of the damage.

'Didn't want to die in their homes'

Dozens of people who fled their homes were taken in by residents of the nearby municipality of Ansiao.

"There are people who arrived saying they didn't want to die in their homes, which were surrounded by flames," said Ansiao resident Ricardo Tristao.

President Marcelo Rebelo went to the Leiria region to meet victims' families, saying he was "sharing their pain in the name of all the Portuguese people".

Pope Francis offered his condolences in his Sunday prayers while EU Commission chief Jean-Claude Juncker hailed the bravery of the firefighters.

Portugal was hit by a series of fires last year which devastated more than 100,000 hectares (1,000 square kilometres) of the mainland.

Fires on the tourist island of Madeira in August killed three people, while across 2016 around 40 homes were destroyed and 5,400 hectares of land burned.

In 1966, a blaze in the forest of Sintra, west of Lisbon killed 25 soldiers trying to battle the flames.