Marikana Report: NUM, AMCU and Lonmin could have done more 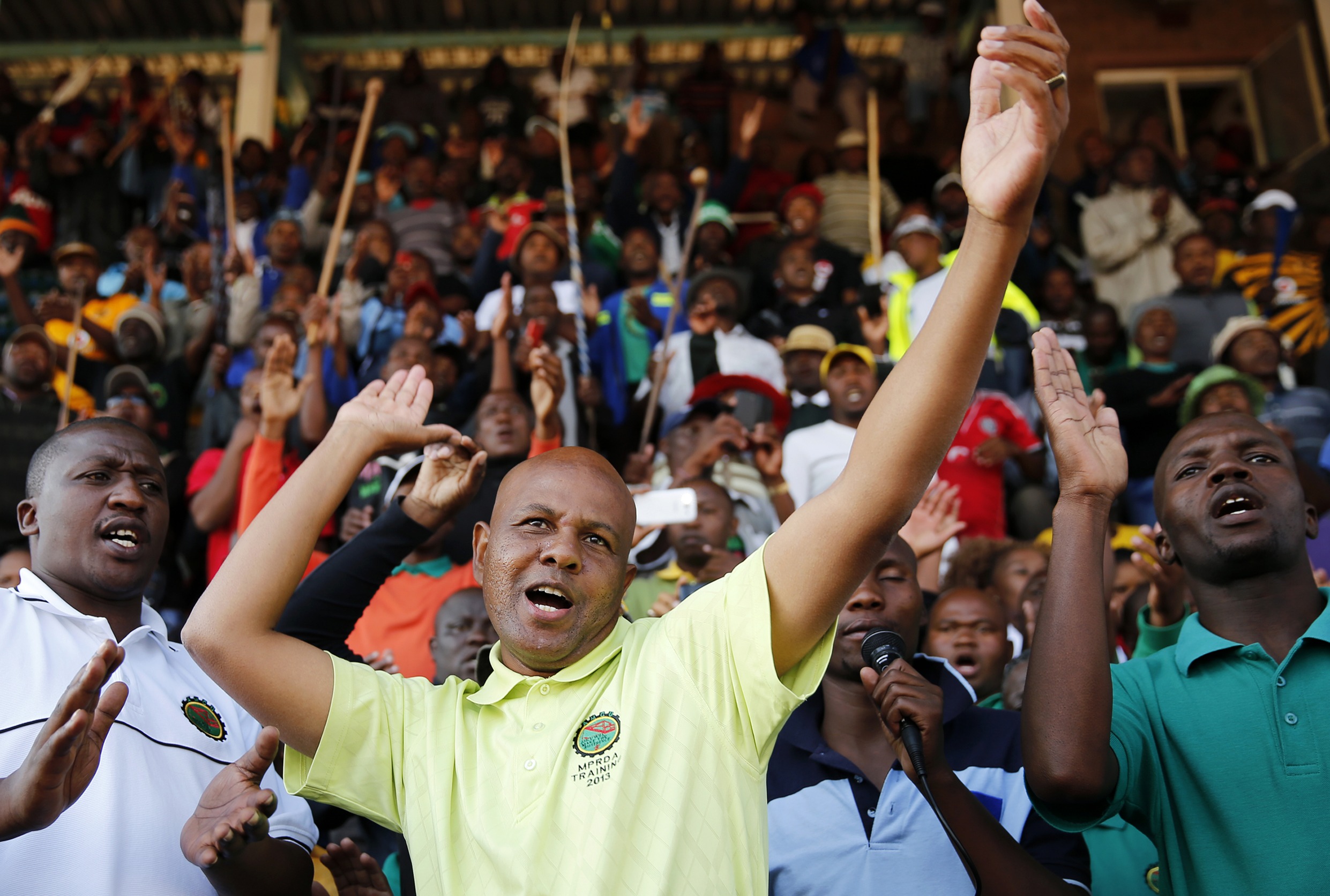 President of South Africa's Association of Mine workers and Construction Union (AMCU) Joseph Mathunjwa (C) sings before addressing the Lonmin strikers at the Wonderkop stadium in Nkaneng township outside the Lonmin mine in Rustenburg May 14, 2014.

PRETORIA – The Marikana Commission has found that Lonmin and the National Union of Mineworkers did not use their “best endeavours” to the resolve the wage dispute that lead up to the death of 44 people over several days in August 2012.

On Thursday night President Jacob Zuma read a summary of the report which dealt with the actions of the police, government, Lonmin and the two unions implicated in the massacre.

Zuma said the Marikana Commission had found that Lonmin “did not use its best endeavours to resolve the disputes that arose between itself and its workers”.

“It also did not respond appropriately to the threat of, and the outbreak of violence. Lonmin also failed to employ sufficient safeguards and measures to ensure the safety of its employees,” Zuma said.

The commission found that Lonmin “insisted that its employees who were not striking should come to work, despite the fact that it knew that it was not in a position to protect them from attacks by strikers.”

Zuma said the commission criticised Lonmin’s implementation of undertakings with regards to the social and labour plans, which included promises to provide housing for staff.

The commission recommended Lonmin&39;s failure to comply with its housing obligations be investigated by the Department of Mineral Resources. It called on the department to “enforce the performance of these obligations by Lonmin.”

The commission also questioned the actions of the Association of Mineworkers and Construction Union, which lead the strike at Lonmin in August 2012.

Zuma said the commission had found that AMCU officials “did not exercise effective control over AMCU members and supporters in ensuring that their conduct was lawful and did not endanger the lives of others.”

“They sang provocative songs and made inflammatory remarks, which tended to aggravate an already volatile situation,” Zuma said of the report.

The commission did however have some praise for the President of AMCU, Joseph Mathunjwa, saying he “did his best before the shootings to persuade the strikers to lay down their arms and leave the koppie.”

Of the NUM, the Zuma said the commission found that like Lonmin “it did not exercise its best endeavours to resolve the dispute between itself and the strikers.”

“The NUM wrongly advised rock drill operators that no negotiations with Lonmin were possible until the end of the 2 year wage agreement. The union also did not take the initiative to persuade and enable Lonmin to speak to the workers,” Zuma said.

The commission also found that like AMCU, the NUM failed to exercise effective control over its members to ensure that they acted within the law and did not endanger lives.

“It encouraged and assisted non-striking workers to go to the shafts in circumstances where there was a real danger that they would be killed or injured by armed strikers,” Zuma said.