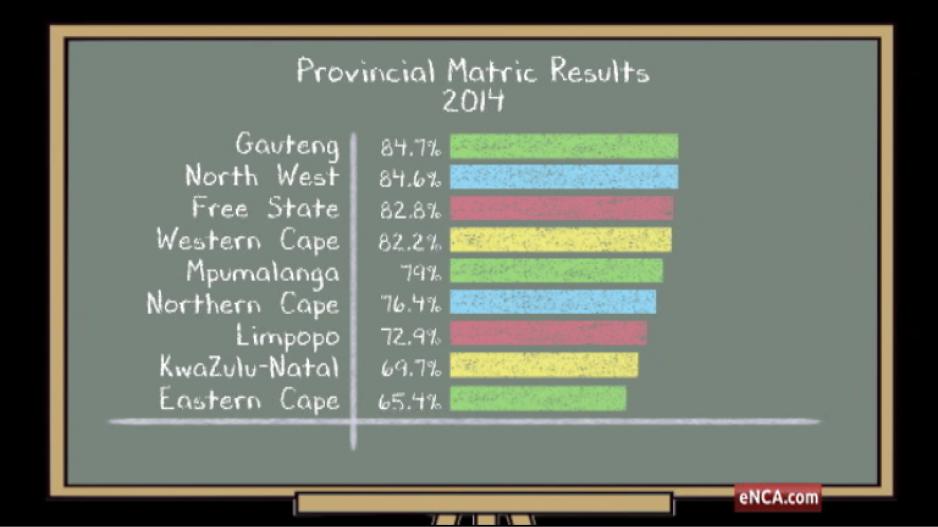 Basic Education Minister Angie Motshekga announced that 75.8% of pupils who sat down for the final exams passed, a 2.4 percentage points drop from 2013.

Get your Matric results on www.enca.com/matricresults

JOHANNESBURG - Most Matrics in 2014 passed their National Senior Certificate (NSC) but the pass rate has decreased by 2.4 percentage points compared with last year.

The NSC pass rates per province are:

However, the final number of pupils listed as "total wrote" according to the DBE document contradicts figures provided by regulator, Umalusi on December 30.

"In total 550,127 full-time and 138,533 part-time candidates were enrolled for the NSC examinations set and administered by the Department of Basic Education," Umalusi chair Dr John Volmink said.

According to the DBE data, Gauteng achieved the highest ratio of NSC passes compared with the number of pupils who wrote. The province was followed by the North West and the Free State.

KwaZulu-Natal, which had the greatest number of matriculants, saw the biggest drop in its pass rate compared with 2013. It dropped to 8th in the provincial rankings. Yet, nationally 75.8 percent 2014 pass rate - despite being a drop from last year - is still the second highest matric pass rate in 20 years.

Education analyst Graeme Bloch, along with Equal Education, have cautioned that the Matric pass rate does not paint a full picture of public education standards in South Africa. Significantly, it does not reflect the number of students who drop out.

Hundreds of thousands of learners leave school before reaching Matric.

Among those who remain in the institution, there appears to be deficient skills in mathematics, science and literacy. The results in mathematics and mathematical literacy for 2014 were poor, as Volmink explained during a press conference, days before Motshekga&39;s announcement.

"To be quite frank, we thought the results would be much worse because large sections of the mathematics curriculum [were] not there last year," said Volmink.

In the same conference he said evidence of "group copying" was found in 58 centres in Eastern Cape and KwaZulu-Natal. Consequently, pupils from those schools would have to wait longer to receive their NSC results.

"I put in the same effort as I have always put in, so I expect good results as usual. I did what I know works for me," she said.

"I have dedicated the year to myself and achieving the goals I’ve set out."

"I am very scared about receiving my results. I am so nervous I don’t even know what I am doing or thinking currently."

"I am excited about a braai my mum promised me if I pass very well," she added.

Many schools will put up lists bearing their pupils&39; results on school premises at midnight on Monday. eNCA.com has arranged a service, which allows pupils who register here to receive their personal results on Tuesday morning.

Those who register will receive an SMS or email alert with a link to their personal outcomes for Matric.

In the Western Cape, however, schools will only display their pupils&39; results from midday on Tuesday, 6 December. Pupils will have access to their personal results online at the provincial website from 15:00, according to a statement released by Minister of Education in the Western Cape, Debbie Schfer.

"This is done for a number of reasons, which include the fact that principals examine the results to pick up any errors, and to alert the WCED regarding a candidate that may be disappointed by their results and need counselling."

Rather, pupils&39; results will be listed according to their examination number. The top learners at national and provincial level will be identified by name.

"The SACP hopes that the decision by the Basic Education Department represents the starting point towards individual learners’ results not being published in newspapers at all," said spokesperson Alex Mashilo in a statement.