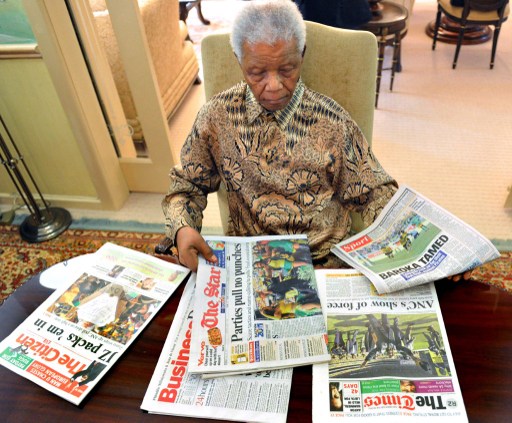 Nelson Mandela's daughters are allegedly suing their father for the rights to his artworks and control of his millions.

JOHANNESBURG - South Africa and France are the only countries whose media coverage of ailing former president Nelson Mandela focused on his legacy rather than his health, according to a media research company.

The tone generated by increased coverage of the critically ill anti-apartheid icon&39;s health had become negative, except in South Africa and France, Media Tenor SA found.

"Against the background of an ailing Nelson Mandela, very few countries are trying to steer away from the sombre tone by highlighting the legacy that he is likely to leave.

"However, his media tone becomes more negative the more critical his health is getting, " senior researcher Stephano Radaelli said on Tuesday.

In terms of foreign news coverage, UK-based ITV and US-based CBS were "most concerned" about Mandela&39;s health from April to June this year.

However, stations in the two countries in general were not contributing to a positive image of Madiba.

"Should the media tone remain at such dire levels, this could potentially have an impact on Mandela&39;s popularity ratings in opinion polling in months to come," Radaelli said.

"Media coverage for Nelson Mandela dissipated after his official retirement from the public arena in June 2004, and only remained topical around his birthday in July of each year. Recent health concerns led to a shift in media interest and tone for the former president," Radaelli said.

From January 2012 to March this year, television coverage on Madiba had seen slight increases.

But, from March to June this year, South African media coverage grew, along with interest from broadcasters in other parts of the world.

After South Africa, interest grew in the UK, France, Canada, and the US.

"After re-admittance to hospital in April, almost all TV news have increased their share of coverage on Nelson Mandela during the past three months compared to the coverage they offered him 15 months prior to that," Radaelli concluded.

Mandela spent his 25th day at the Medi-Clinic Heart hospital in Pretoria on Tuesday.

Large contingents of local and foreign journalists remain camped outside the hospital.