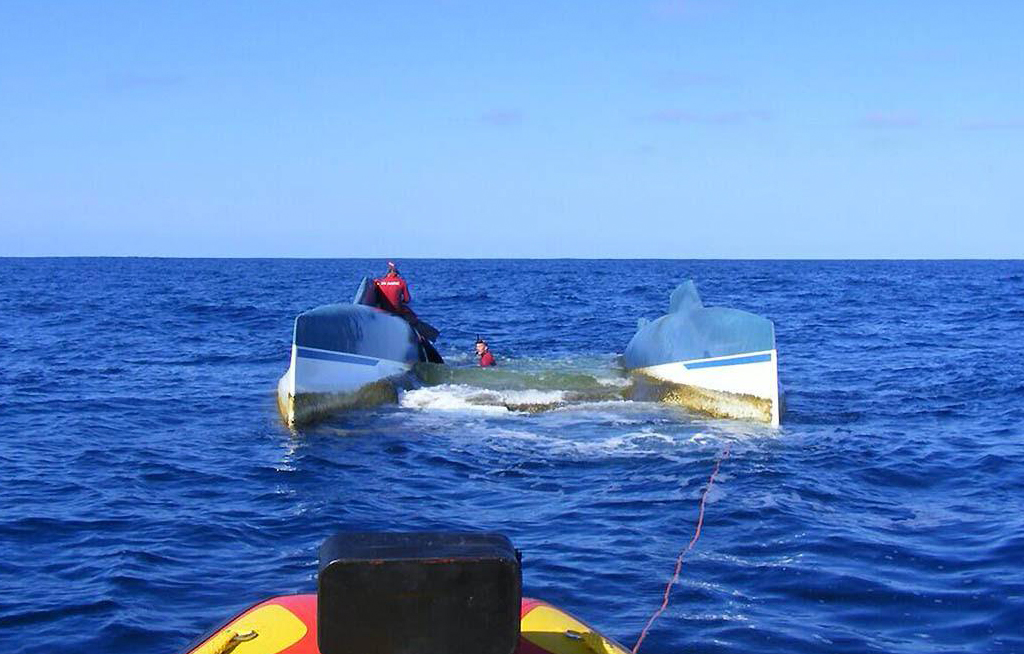 January 24 - A catamaran hull has been found adrift about 42 nautical miles off Cape Agulhas, but has yet to be positively identified. Photo: NSRI

CAPE AGULHAS - The hull of a capsized catamaran has been located adrift about 42 nautical miles off-shore of Cape Agulhas but it is too early to say whether it is the Sunsail which went missing about a year ago, the National Sea Rescue Institute (NSRI) said on Sunday.

“The floating capsized casualty catamaran has reportedly been sighted on numerous occasions and hopes are that she is the catamaran Sunsail that has been missing for a year,” NRSI spokesman Craig Lambinon said.

NSRI Agulhas duty crew launched a sea rescue craft at 3.30pm on Saturday and on arrival at the scene photographed the upturned hull. Rescue swimmers free dived to investigate markings and as much as could be investigated under the hull. NSRI could not positively identify her as the Sunsail, he said.

No physical markings were found on the catamaran to help identify her and photographs had been sent to the Maritime Rescue Co-ordination Centre (MRCC), family of the missing crew, and the catamaran’s owners to allow them to investigate further.

NSRI Agulhas attached a satellite tracking beacon to the catamaran which the MRCC would monitor to keep track of the position of the hull until Smit Amandla’s tug Peridot arrived at the scene to attempt to tow the catamaran to an appropriate port.

Telkom Maritime Radio Services had broadcast a maritime navigational warning to warn ships in the area of the navigational hazard, Lambinon said.

The crew of the Sunsail – South Africans Anthony Murray, Reg Robertson, and Jaryd Payne – was last heard from on January 18 last year.

The crew’s families reported their failure to arrive at their destination on February 12 last year.