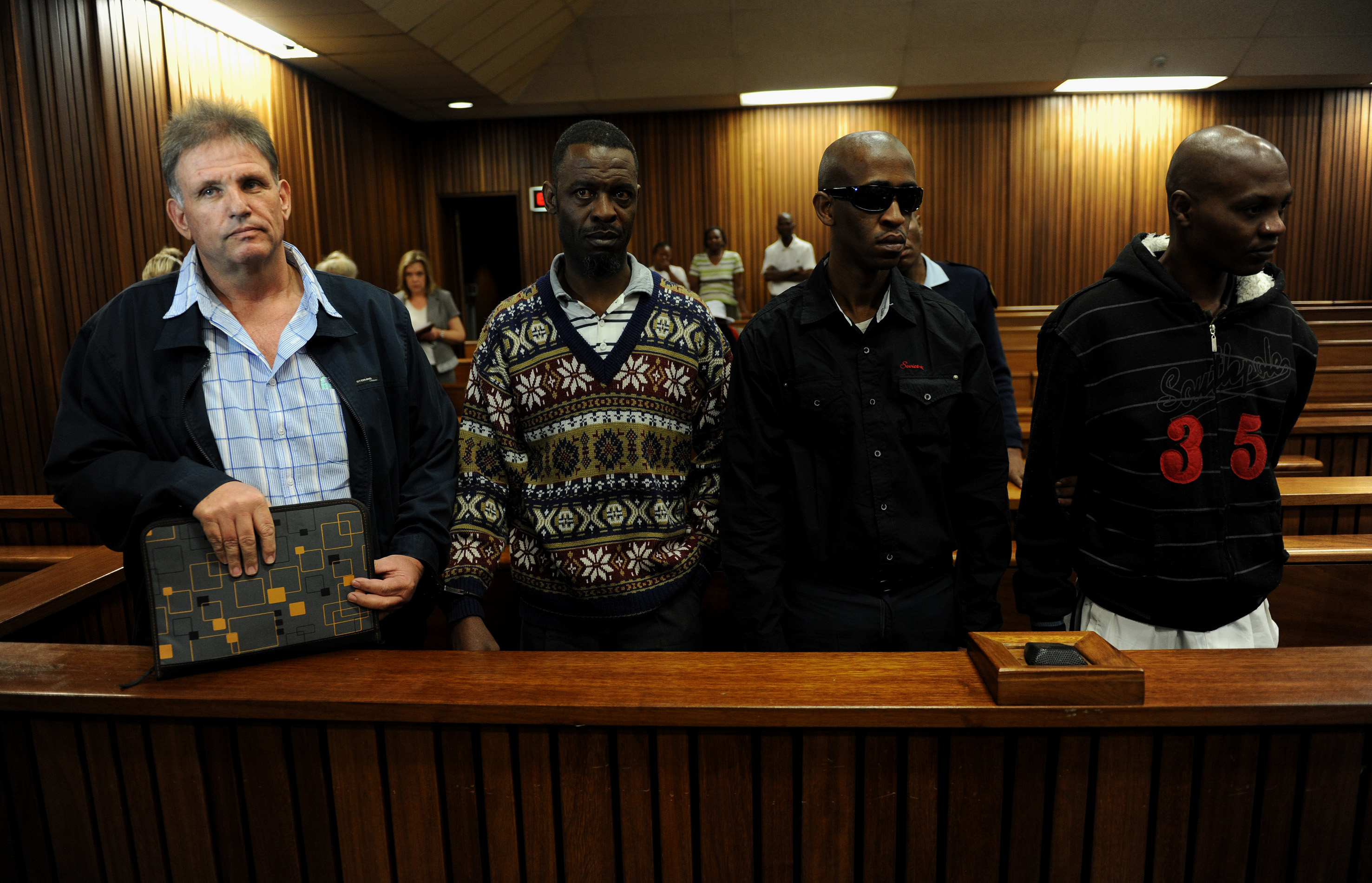 'Modimolle Monster' Johan Kotze appears in the High Court in Pretoria on Monday, 15 April 2013 along with his co-accused (from left) Andries Sithole, Frans Mphaka and Pieta Mohlane.

PRETORIA - Johan Kotze, the so-called Modimolle Monster, has been sentenced to life in prison for the murder of Conrad Bonnette, the rape of his ex-wife Ina Bonnette and for kidnapping and assault.

His three co-accused -- Andries Sithole, Frans Mphaka and Pieta Mohlake -- have also all been given life sentences.

At the start of the sentencing, Judge Bert Bam made it clear the law said that Johan Kotze and his co-accused should all get life in jail, unless compelling reasons were given.

Bam detailed the personal circumstances of Johan Kotze&39;s co-accused. Apart from Sithole, they had no previous convictions.

Andries Sithole&39;s lawyer previously argued that Johan Kotze wanted to make Ina Bonnette&39;s life a living hell, and misused him to do it.

Ina Bonette and her daughter Angelique, who describes her mom as a "hero" JohanKotze @encanews pic.twitter.com/Y8UEq0LxhL

"The murder of Conrad Bonnette was senseless. The boy begged for his life and Johan Kotze showed no mercy," the judge said.

He also said that rape is the most humiliating crime a woman could experience if she survived.

Johan Kotze&39;s lawyer argued that the rape of Ina Bonnette wasn&39;t the worst kind as she "wasn&39;t seriously injured".

"Bonnette was badly attacked, with slaps and punches included, she was mutilated. Three masked men attacked her. No mercy was shown," Bam said.

He said that a more traumatic experience could not possibly be imagined.

"What they did to her was despicable and full of hatred," he said.

"Johan Kotze has shown no remorse. His lawyer&39;s argument to contrary is without substance," Bam added.

The judge said it cannot be found that, because of his personality problems, Kotze had diminished capacity.

"I can&39;t find any reason not to give Johan Kotze life for rape and murder," Judge Bam said.

"The assault on Ina Bonnette means she will be permanently disfigured."

Bam said that was Kotze&39;s goal.

Bam also found no reason not to give Andries Sithole a life sentence.

Pieta Mohlake and Frans Mphaka may not have been part of the planning of this crime, but that wouldn&39;t help them, he said.

"All the accused are equally responsible for the attack on Ina Bonnette, they had a common goal, even if all did not help plan attack," Bam said.

The judge ruled that the aggravating factors in this case are all overwhelming, and that he would take their 18 months in custody while awaiting trial, into consideration.

He said that it appeared that Kotze was excessively jealous over Ina Bonnette.

Minister Lulu Xingwana: JohanKotze and his co-accused are monsters. They must rot in jail. @eNCAnews

Kotze was sentenced in the High Court in Pretoria on Wednesday at 11.30am.

Prior to sentencing, Kotze’s argument was that he was in a state of temporary insanity.

However, the judge found that the amount of planning and telephonic conversations proved that it was in fact a meticulously planned assault.

The court also ruled that Kotze and his co-accused, Andre Sithole knew exactly what they were doing.

The fact that they went to store to buy stockings to conceal their faces demonstrated an orchestrated attack, and not a spur of the moment incident as Kotze had claimed.

The victim impact report also revealed the peripheral trauma that the family had endured because of the attack.

Ina Bonette weeps as she describes the pain and humiliation of this trial, says she did it "for my son" @eNCAnews JohanKotze

“The Lord and I know what happened that day, and nothing will take me away from what I testified to. I stand by what I said," said an emotional Bonnette.

“Now, when I leave this court, I will go to my child’s grave, and I will become quiet there and tell him that justice has been done,” she said.

Angelique, Ina Bonnette’s daughter, is said to be severely struggling with the incident, especially that of her brother’s murder and the terrible sexual violence her mother experienced.

Bonnette&39;s prosecutor Retha Mientjies said: “I think Mrs Bonnette will finally be able to get closure on this and look forward to her life.”

Social workers said that Angelique gave a detailed account of her loss, how she could not speak to her father about her brother’s death because he was inconsolable.

Her schoolwork was also said to be suffering as a result.

These aspects would all be taken into consideration for the sentencing.