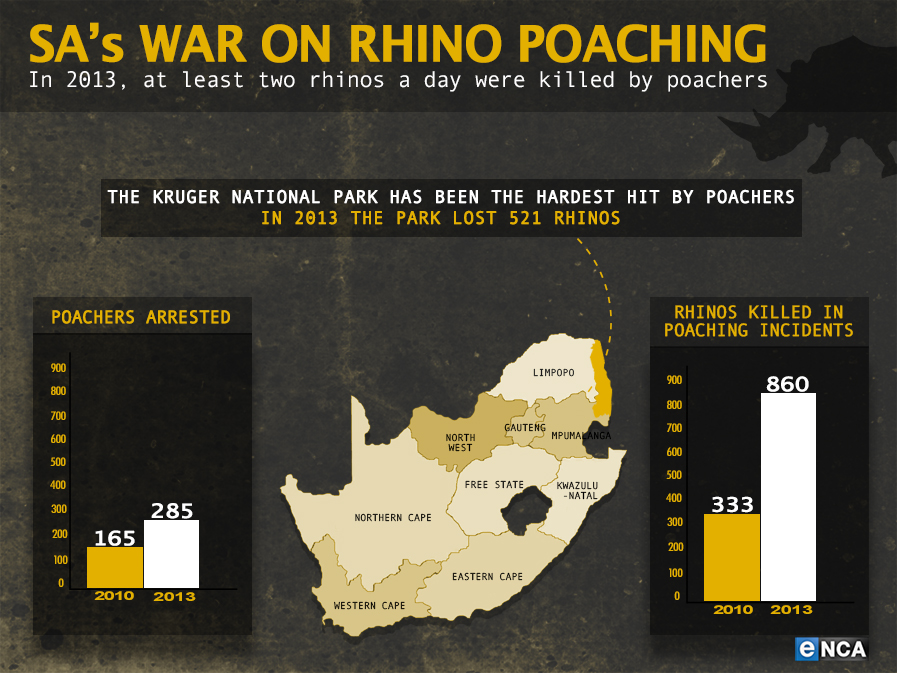 JOHANNESBURG - The war against rhino poaching in South Africa is making headway. More than 280 poachers have been arrested in 2013, a significant increase from the 165 poachers arrested in 2010.

Recently, a Vryheid Magistrate’s court sentenced two poachers to ten years imprisonment for poaching a black rhino and being in possession of two rhino horn, an incident which occurred in 2010.

In a media statement, Minister Edna Molewa’s department of water and environmental affairs praised the work of all involved in catching the poachers.

“The Department commends SANParks rangers and the police for their sterling efforts that have led to the arrest of 13 rhino poaching suspects countrywide in the past two weeks.”

Even though the number of arrests has increased, the number of rhinos poached remains high. This year 200 more rhinos have been killed compared to 2012 (668 rhinos killed).

The number of rhinos poached for 2013 stands at 860, with more than 500 rhinos killed in the Kruger National Park alone.

WWF SA’s rhino coordinator Jo Shaw told eNCA.com that while the increasing number of arrests is promising, statistics for convictions of poachers is needed as well as more high level arrests.

“Removing criminals at this level isn’t really going to bring about change.” Said Shaw, explaining that the poaching will still continue unless the masterminds are arrested.

In 2012 South Africa shocked the world by handing down a 40 year sentence to convicted poacher Chumlong Lemthongthai. The Thai national was found guilty on 52 charges and had 26 rhino horns in his possession .

Shaw noted that the heavy sentence was justified, “They could give him a longer sentence because he was a mastermind in guiding the actions of others to commit acts of crime.”

The WWF SA is calling for a bigger collaboration between law enforcement agencies.

“If we could have collaboration between our national authorities and consumer countries to bring criminals to book that could have a significant impact,” said Shaw.