I should have died, says MP in plea for medical marijuana 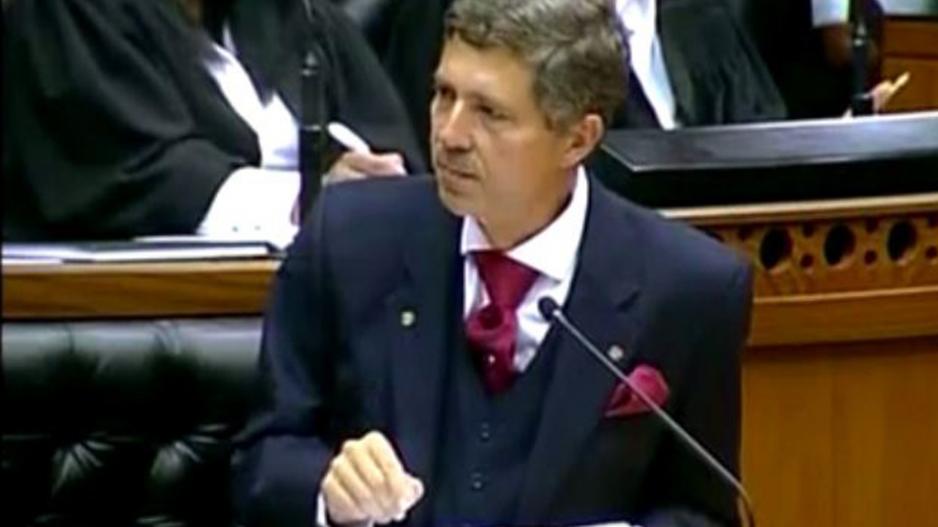 February 19, 2014: IFP Member of Parliament Mario Oriani-Ambrosini has made a plea to the National Assembly. He has asked for a change in laws that prohibit marijuana for medicinal purposes.

PARLIAMENT - Cancer-stricken Inkatha Freedom Party MP Mario Oriani-Ambrosini is to table legislation to decriminalise the medical use of dagga, he said on Wednesday.

"I have published and will be introducing tomorrow a Bill -- a simple Bill -- to enable doctors to make decisions with respect of terminal cases of cancer and other diseases... on returning to doctors the discretion... to prescribe innovative systems such as medical marijuana and bicarbonate of soda and many other therapies which are available out there," Oriani-Ambrosini said during the debate on the State of the Nation Address.

The Medical Innovation Bill, published in the Government Gazette this week, is "to make provision for innovation in medical treatment and to legalise the use of cannabinoids for medical purpose and beneficial commercial industrial uses".

Oriani-Ambrosini, who returned to the National Assembly after months of absence, made an impassioned plea to President Jacob Zuma and his government to decriminalise "medical marijuana".

"You&39;ve known me for 20 years and I&39;m sure you had a few occasions to curse my name," a gaunt-looking Oriani-Ambrosini said as he spoke directly to Zuma.

"I&39;m speaking to you today somehow as a changed man, not to oppose, but to plead with you to provide the laws on behalf of many people in my condition who do not have a voice."

Oriani-Ambrosini admitted to illegally having smoked dagga in South Africa as an alternative treatment to his condition.

"I was supposed to die many months ago and I am here because I had the courage of taking illegal treatments in Italy in the form of bicarbonate of soda and here in South Africa in the form of cannabis, marijuana or dagga," he said.

"Otherwise, I would be pumped with morphine and I would not be able to speak to you, Mr President."

In November last year, a national working group made presentations to Health Minister Aaron Motsoaledi on the subject.

"What this paperwork stands for is the proposition that there is no rational argument for continuing to deprive medical marijuana to people like me who need it," Oriani-Ambrosini said.

"It is a crime against humanity not to allow that to take place."

The decriminalisation of dagga for medical and industrial purposes was a huge opportunity for the country, the self-proclaimed libertarian said.

"Medical tourism is something on which we can make real income for the country as we can with hemp with marijuana for commercial and industrial purposes," Oriani-Ambrosini said.

"The Chinese government is making huge investments in hemp as a fabric and construction material."

The MP, who introduced the First Private Members&39; Bill in Parliament after a victory in the Constitutional Court, also aimed his pleas at Motsoaledi.

"He [Motsoaledi] has got guts and backbone."

While Motsoaledi could not respond as he had already spoken during the debate, his Cabinet colleague Lindiwe Sisulu did promise Oriani-Ambrosini some good news.

"It hurts me to see you in the state you are in," Sisulu said.

"I had a word with the minister of health and he indicated to me that we are very keen to be following up on discussion and research around the world on the issue of the potential of... decriminalising medical marijuana. We are a caring society," she said.

In May last year, Oriani-Ambrosini announced he had been diagnosed with stage four lung cancer.

At the time, he said his doctors did not expect him to see Christmas 2013.