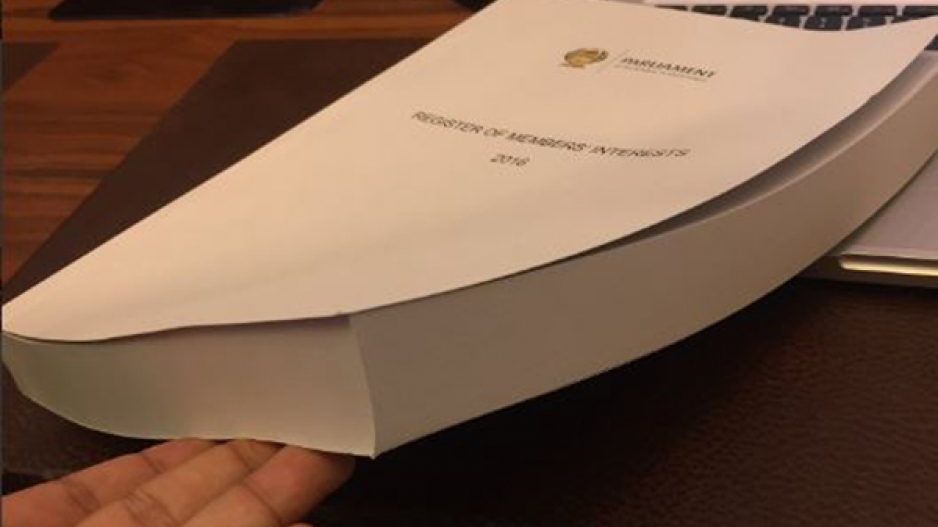 After fourteen members of parliament made late submissions, the committee resolved that an investigation of non-compliance be instituted on why they failed to submit on deadline.

CAPE TOWN - From genuine ostrich-leather notepad holders, free tickets to jazz concerts and soccer matches, bottles of whisky and wine to cellphones, apartments and houses, land, shares and company directorships these are just some of the items that MPs declared in the Register of Members’ Interest for 2016 on Tuesday.

President Jacob Zuma’s name did not appear in the register.

Deputy President Cyril Ramaphosa, Minister of International Relations and Cooperation Maite Nkoana-Mashabane, and Minister of Home Affairs Malusi Gigaba were among the MPs who received the most gifts during the period.

According to the register, Ramaphosa owns shares and other financial interests worth more than R130-million in different investments, sits as a director in various companies, owns multiple properties in Johannesburg and Cape Town, and is a trustee in at least four trusts.

Dep President Ramaphosa Interests takes up 4 pages. Most MPs have only 1 page. #MembersEthics

Nkoana-Mashabane owns just two properties but received a catalogue of small gifts, including a fur coat worth at least R3,000 from the Kazakh ambassador during a courtesy call.

Gigaba, who owns a property at Blue Valley Golf Estate, is also in the process of buying a house in Centurion.

Malusi Gigaba was gifted, among other things some Sesotho Vaseline and 2 somethings known as "lip bum" #MembersEthics pic.twitter.com/XERCjtuo4s

Communications Minister Faith Muthambi appeared to be a big fan of the Orlando Pirates football club, with no fewer than three match tickets to the team’s games, each valued at R1,500.

Democratic Alliance leader Mmusi Maimane owns two houses in Roodepoort, west of Johannesburg, and declared a few gifts and hospitality items, including paintings worth R10,000 and R6,000, and a R6,000 Fabiani suit, shirt and tie from the designer.

Mmusi Maimane was given a 6 months supply of hipster socks #MembersEthics pic.twitter.com/gVR28N0uFH

Economic Freedom Fighters (EFF) leader Julius Malema had “nothing to disclose” except his interests in family and investment trusts that had no benefit.

The deadline for submission of annual disclosure was extended from the end of August to 21 September 2016 after 55 MPs could not submit their information on time.

After 14 MPs made late submissions, the committee resolved that an investigation of non-compliance be instituted to find out why they failed to submit on deadline.

But the register could not be released immediately after adoption as it had some sections that were confidential.