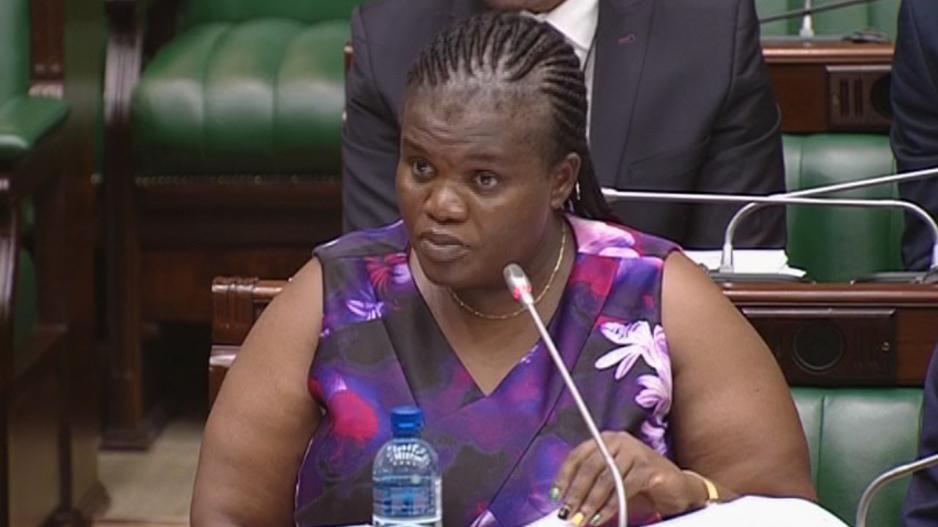 PARLIAMENT – Communications Minister Faith Muthambi was put through the wringer by MPs on Wednesday as they tried to ascertain whether she would shoulder any blame for the crisis at the South African Broadcasting Corporation (SABC).

Muthambi, addressing MPs conducting the parliamentary inquiry into the SABC, distanced herself from much that was happening at the broadcaster, saying there should be “collective responsibility” for what is happening there.

“The governance failure of the SABC shouldn’t be attributed to the shareholder (Muthambi) …it should be a collective responsibility.

“I’m not exempting myself. Where I’ll take responsibility, I’ve done that,” she said as MPs asked critical questions about her role in the SABC crisis.

She insisted the problems at the SABC started long before she was there.

Muthambi did however take acknowledge she had approved the appointment of Hlaudi Motsoeneng as chief operating officer in 2014, a position a court found he was not entitled to hold. She said her decision to appoint him was a “correct decision”.

“At that time, chair, I must say there was justification (for Motsoeneng’s appointment),” said Muthambi.

“I sought legal advice… before I could concur.”

Last week a former board member suggested Muthambi could not have considered the matter properly as her announcement of Motsoeneng’s appointment was made the morning after a late-night board vote. He joked she must have considered her decision “in her dreams”.

MPs asked the minister about how witness after witness before the inquiry testified Motsoeneng was “a law unto himself”.

“I don’t recall anyone complaining about the conduct of Mr Motsoeneng,” said Muthambi.

MPs pushed her, noting that a former board member, the late Hope Zinde, who was unceremoniously removed from the board last year, had complained about “the behavioural tendencies” of Motsoeneng.

“May her soul rest in peace, Hope (Zinde), what she raised, she was not seeing eye-to-eye with the former board chairperson… I didn’t receive any complaints about Mr Motsoeneng.”

MPs did not stop there, with the EFF's Fana Mokoena interrogating Muthambi about her relationship with Motsoeneng.

Muthambi insisted it was strictly professional.

“I don’t have any other relationship with Hlaudi Motsoeneng,” she said.

On his salary increase of over a million rand, Muthambi said it was not her doing.

“On this matter, it’s the board… they need to account.”

Exploring the link between President Jacob Zuma and Motsoeneng, MPs took Muthambi to task on claims made by Zinde last year that the minister had said to her: “But Baba loves him, he loves him so much. We must support him.”

Baba is a term of endearment for Zuma.

Muthambi denied ever uttering those words.

“I’ve refuted that comment. I never said that. There’s evidence of that.”

The controversial deal between the SABC and MultiChoice giving the pay station the right to some of the SABC archives, Muthambi said she was unaware of a massive bonus – somewhere between R11m and R33m – to be earned by Motsoeneng.

“I must say, I read it on the paper and when I read it in the paper I have since written to the company secretary to give me information.” She said she was still awaiting a response.

Committee chairman Vincent Smith said if the MultiChoice deal, which according to board minutes was approved on January 29 last year at a cost of R256m, goes through, Muthambi will have to answer some tough questions.

“If South Africans are denied the crown jewels (SABC archives) because of this transaction under your watch, you will come and account to Parliament,” Smith said sternly.

“At end of the day, if this thing happens, Parliament will have to hold you accountable because it happened under your watch.”

Muthambi was also asked why she did not appeal to board chairman Mbulaheni Maguvhe to resign given that he’s the only remaining board member, rendering it dysfunctional and unable to take decisions.

“Parliament has already taken charge. I couldn’t be seen to be interfering with the processes of Parliament.”

MPs were unimpressed with Maguvhe’s testimony on Tuesday as he could not answer simple questions like who the SABC belongs to and was seemingly not aware of what was happening at the broadcaster.

“We are painting a picture of a person who has no clue…the chairman of the board comes to Parliament to say he has no idea what is happening. Is this individual fit and proper to run a state asset for which you are accountable?” Smith asked of Muthambi.

Muthambi shifted around uncomfortably in her seat before answering: “I hear you and I think you are putting me in a very difficult position to comment. It would be very much unfair…”

Muthambi sang the praises of The New Age/SABC partnership on breakfast briefings, which some have described as SABC resources being used to prop up the newspaper and the ANN7 television station, both owned by the Gupta family.

Government departments have spent millions in taxpayers' money for tables at the breakfast briefings. Muthambi said she believed it is for a "good cause".

“To me that is a very good platform…it then gives the people the opportunity to interact, understand what the ministers are doing,” she said.

Muthambi, however, denied that she was close to the Gupta family.

“I don’t have any relationship with the Guptas,” she claimed.

It emerged during the inquiry that it had already cost Parliament half a million rand so far to conduct it. The process will continue on Thursday, with possibly the last of the witnesses to be called.