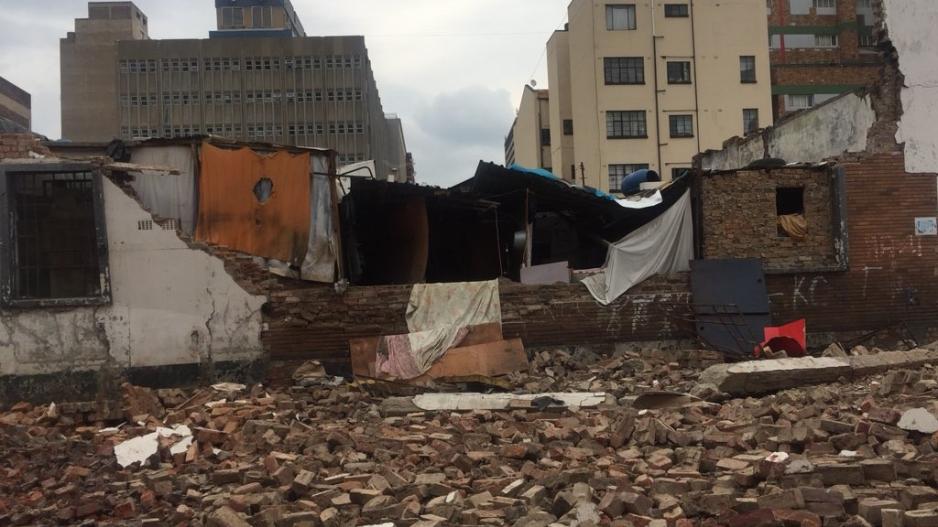 A wall collapsed along Davies street in Doornfontein where three young children aged between three and 10-year died on Monday.

JOHANNESBURG - Joburg mayor Herman Mashaba has urged the national Department of Public Works to join forces with the city to identify and restore derelict buildings so they can become habitable again.

This comes after three young children died and two others were injured when a wall in the abandoned warehouse they lived in collapsed on Monday. The wall, in a building on the corner of Davis and Rockey Street in Doornforntein, caved in

The three deceased were aged three, five and 10, while the two injured children were aged five and six.

Mashaba said that there were far too many residents living in derelict and unsafe buildings and that the slum-like conditions infringed on their right to dignity.

"Tragically, there are hundreds of derelict buildings in the inner city of Johannesburg. Some of these properties have been abandoned and owners cannot be traced. This makes it difficult, if not impossible, for the city to ensure compliance with applicable by-laws, which in turn contributes to the degradation of the urban environment," Mashaba said.

"On 26 February 2018, I wrote to the former Minister of Public Works, Mr Nathi Nhleko, to request that an agreement be concluded with the Department of Public Works, in which the department will name the city as its nominee for the transfer of these abandoned properties in Johannesburg.

"To date, I have not heard back from the former or current minister, Mr Thulas Nxesi."

Mashaba said that he had sent a follow-up letter to Nxesi on Monday morning before the tragedy, imploring that his department and the city work together in the best interests of residents.

MMC for Public Safety, Cllr Michael Sun at the scene: "I am aggrieved by the death of such innocent young lives. This incident is a devastating tragedy. Our Disaster Management team are on site & will assist the displaced with food, clothing, blankets & temporary accommodation.” pic.twitter.com/1ZIa3MEG6D

"It is vital that the different spheres of government work together with civil society and other stakeholders to ensure that we sustainably address the human crisis occurring in the inner city of Johannesburg. In doing so we can help to prevent such tragedies from reoccurring," Mashaba said.