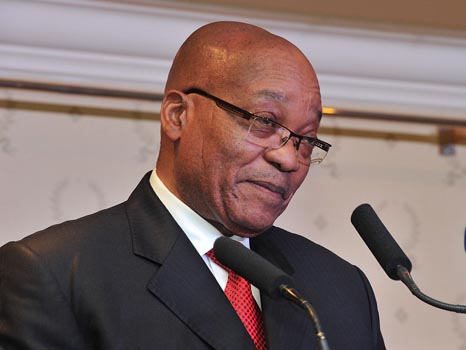 President Jacob Zuma speaking during Bishop of the Methodist Church Ivan Abrahams' Farewell Gala Dinner at the Emperors Palace in Johannesburg on November 19, 2011.

"On the 6th of April 1979, Solomon Kalushi Mahlangu, an Umkhonto we Sizwe freedom fighter, was hanged by the apartheid government in Pretoria at the prime of his life, the age of only 23," said Zuma, adding that the day marked a sad moment in history.

"That is the South Africa we have emerged from, where the state had the right to kill and destroy the lives of many, including young people," said Zuma.

"We salute Solomon Mahlangu for his sacrifice and bravery and indeed many others who laid down their lives for the attainment of freedom, democracy, justice, equality and human rights in our country."

Zuma was speaking at the launch of a multi-billion rand housing project which was to roll out in Cornubia, KwaZulu-Natal.

"The entire Cornubia development has an estimated construction value of R25-billion over a period of approximately 25 years," said Zuma.

"The project will include the provision of 28,000 homes catering for a wide range of income levels.

Clinics, schools and amenities for public transport, including the Bus Rapid Transport would also be constructed.

Over 100 hectares of land would be set aside for businesses.

"As this is going to stretch over a period of years, at least two decades, it will also help to provide more employment opportunities in this area," said Zuma.

He said over 12-million South Africans had benefited from the 3,6-million houses and serviced sites provided by government since 1994.